He died on June 18, 1958 and was buried in Fairview Cemetery, Fairview, New Jersey.

Other Schoenfelds buried in other graves are: 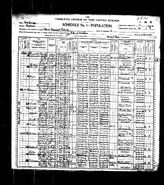