Familypedia
Register
Don't have an account?
Sign In
Advertisement
in: Windsor (surname), Born in 1894, Died in 1972,
and 45 more

King of the United Kingdom

Before his accession to the throne, Edward VIII held the titles of Prince Edward of York, Prince Edward of Cornwall and York, Duke of Cornwall, Duke of Rothesay, and Prince of Wales (all with the style Royal Highness). As a young man, he served in World War I, undertook several foreign tours on behalf of his father, and was associated with a succession of older, married women.

After his abdication, he reverted to the style of a son of the Sovereign, The Prince Edward, and was created Duke of Windsor on 8 March 1937. During World War II, he was at first stationed with the British Military Mission to France, but after private accusations that he held pro-Nazi sympathies, was moved to the Bahamas as Governor and Commander-in-Chief. After the war, he was never given another official appointment, and spent the remainder of his life in retirement. 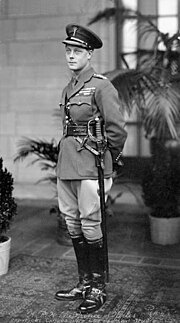