Familypedia
Register
Don't have an account?
Sign In
Advertisement
in: Of Wessex (surname), Born in 870, Died in 924,
and 5 more

King of the Anglo-Saxons

Edward the Elder, King of the Anglo-Saxons succeeded his father, Alfred the Great (849-899), as King of Wessex: 899-924, and proceeded to carry on Alfred's work in fighting the Danes and extending the dominion of Wessex over England. He took possession of East Anglia and Mercia. His lordship was at various times recognized by the Northumbrians, the Welsh, the Scots and the Britons of Strathclyde.

Edward the Elder (Old English: Eadweard cyning) was an English king. He became king in 899 upon the death of his father, Alfred the Great (849-899). His court was at Winchester, previously the capital of Wessex. He captured the eastern Midlands and East Anglia from the Danes in 917 and became ruler of Mercia in 918 upon the death of Æthelflæd, his sister.

Compared to his father, Edward is a shadowy figure, even though he was a great soldier, show military achievements probably outshone those of Alfred. By the end of his reign his dynasty had dominance of all of England south of the Humber, but still faced heavy preasure from Irish-Norse forces to the north.

Shortly after gaining the throne, Edward had to withstand a revolt by his cousin, Æthelwold (c868-902), son of his father's older brother, and claimant to the throne. Æthelwold drew support from the Danes of Northumbria and the East Anglia, but his attempt to seize the throne ended with his death in battle at The Holme in Cambridgeshire, about 903.

Edward was able to form a Christian alliance with the Kingdom of Mercia because his sister, Æthelflæd (c872-918), the Lady of the Mercians, was married to Æthelred, the ealdorman of Mercia. With a key victory at Tettenhall in Staffordshire in 910 they were able to beat back the Danes to sieze the Midlands and parts of Southeastern England for their alliance.

After the death of his sister, Æthelflæd (c872-918), the Lady of the Mercians, in 918 Edward became ruler of all Mercia, but faced a short-lived revolt from her daughter, Ælfwynn.

He gained another victory over the Danes in battle at Tempsford in Bedfordshire.

Edward married for the first time to Ecgwynn (c875-) in 893 and two years later she gave birth to his successor: Athelstan (895-939), but they separated by the time Edward became king in 901.

In 899, Edward married Ælfflæd (c880-), a daughter of Æthelhelm, the ealdorman of Wiltshire. Two daughters, Eadflæd as a nun and Æthelhild as a lay sister, joined their mother at Wilton Abbey.

Eadgifu outlived her husband and her sons, and was alive during the reign of her grandson, King Edgar. William of Malmsbury's history De antiquitate Glastonie ecclesiae claims that Edward's second wife, Ælfflæd, was also alive after Edward's death, but this is the only known source for that claim.

Edward married for a third time, about 919, to Eadgifu of Kent (c902-968), the daughter of Sigehelm, the ealdorman of Kent. Their children were: 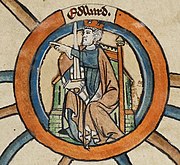