Familypedia
Register
Don't have an account?
Sign In
Advertisement
in: Of Wessex (surname), Born in 769, Died in 839,
and 8 more

Egbert of Wessex was born circa 769 to Ealhmund of Kent and died 839 of unspecified causes.

Egbert (also spelled Ecgberht, Ecgbert or Ecgbriht; 769 or 771 – 839) was King of Wessex from 802 until his death in 839. His father was Ealhmund of Kent. In the 780s Egbert was forced into exile by Offa of Mercia and Beorhtric of Wessex, but on Beorhtric's death in 802 Egbert returned and took the throne.

Little is known of the first 20 years of Egbert's reign, but it is thought that he was able to maintain the independence of Wessex against the kingdom of Mercia, which at that time dominated the other southern English kingdoms. In 825 Egbert defeated Beornwulf of Mercia, ended Mercia's supremacy at the Battle of Ellandun, and proceeded to take control of the Mercian dependencies in southeastern England. In 829 Egbert defeated Wiglaf of Mercia and drove him out of his kingdom, temporarily ruling Mercia directly. Later that year Egbert received the submission of the Northumbrian king at Dore. The Anglo-Saxon Chronicle subsequently described Egbert as a bretwalda, or "Ruler of Britain".

Egbert was unable to maintain this dominant position, and within a year Wiglaf regained the throne of Mercia. However, Wessex did retain control of Kent, Sussex, and Surrey; these territories were given to Egbert's son Æthelwulf to rule as a subking under Egbert. When Egbert died in 839, Æthelwulf succeeded him; the southeastern kingdoms were finally absorbed into the kingdom of Wessex after Æthelwulf's death in 858.

It was in 825 that one of the most important battles in Anglo-Saxon history took place, when Egbert defeated Beornwulf of Mercia at Ellendun—now Wroughton, near Swindon. This battle marked the end of the Mercian domination of southern England.

In 829 Egbert invaded Mercia and drove Wiglaf, the king of Mercia, into exile. This victory gave Egbert control of the London mint, and he issued coins as King of Mercia. It was after this victory that the West Saxon scribe described him as a bretwalda, meaning "wide-ruler" or "Britain-ruler".

At a council at Kingston upon Thames in 838, Egbert and Æthelwulf granted land to the sees of Winchester and Canterbury in return for the promise of support the clergy for Æthelwulf's claim to the throne.

Egbert was buried in Winchester, as were his son, Æthelwulf, his grandson, Alfred the Great, and his great-grandson, Edward the Elder. During the ninth century, Winchester began to show signs of urbanisation, and it is likely that the sequence of burials indicates that Winchester was held in high regard by the West Saxon royal line

According to the Anglo-Saxon Chronicle he married Raedburga. 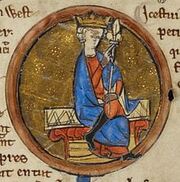