Familypedia
Register
Don't have an account?
Sign In
Advertisement
in: Brigham (surname), Born in 1877, Died in 1962,
and 6 more

Brigham was born in St. Albans, Franklin County, Vermont, son of Sanford J. Brigham and Sarah J. (Bronson) Brigham, and was a descendant of Thomas Brigham and Edmund Rice, early immigrants to Massachusetts Bay Colony. Brigham attended the grade schools, and graduated from St. Albans High School in 1898 and from Middlebury (Vermont) College in 1903. He married Anna S. Hazen, daughter of Stephen Hazen and Harriet (Congdon) Hazen, on 2 October 1906 at Saint Albans, Vermont.

Brigham engaged in farming and the breeding of dairy cattle during his whole lifetime. He was the first farmer with 100-cow herd to average more than 600 pounds of butterfat in one year.[2] He was Auditor for the town of St. Albans in 1911 and 1912, and state commissioner of agriculture from 1913 to 1924. He was a member of the National Agricultural Advisory Committee and of the United States Food Administration, Washington, D.C., in 1918. As well as being a Trustee of Middlebury College 1922-1960, he served as director on the National Life Insurance Company in 1925.[3]

Brigham was elected as a Republican to the Sixty-ninth, Seventieth, and Seventy-first Congresses, and served from March 4, 1925 to March 3, 1931.[4] He was not a candidate for renomination in 1930.

A member of Reconstruction Finance Corporation in 1932, Brigham then served as chairman of Vermont Advisory Banking Board from 1933 to 1936. He was president of National Life Insurance Company, Montpelier, Vermont from 1937 to 1948. He was also president of Franklin County Savings Bank and Trust Company, St. Albans, Vermont from 1944 to 1957 and chairman of the board from 1957 to 1962. 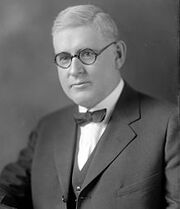