Familypedia
Register
Don't have an account?
Sign In
Advertisement
in: Rurik (surname), Born in 1476, Died in 1513,
and 7 more

Helena Ivanovna of Moscow (Russian: Елена Ивановна; Lithuanian: Elena; Polish: Helena Moskiewska) (19 May 1476 – 20 January 1513) was a Grand Duchess of Lithuania and Queen of Poland as a wife of king of Poland Alexander Jagiellon.

Helena was the daughter of a Grand Prince of Moscow, Ivan III[1], and Sophia Palaiologina, a niece of the last Byzantine emperor Constantine XI Palaiologos. Helena was a younger sister of Grand Prince of Moscow Vasili III of Russia.[2] In 1495 the marriage between Alexander Jagiellon, Grand Duke of Lithuania, and Helena was held in the Cathedral of the Theotokos in Vilnius, in the presence of Saint Macarius, Metropolitan of Moscow. She did not convert to Catholicism to become Queen of Poland and remained faithful to her Eastern Orthodox Church beliefs. That is why she was never crowned.

Helena had two pregnancies (in 1497 and 1499), but both ended in miscarriages. The second miscarriage left her severely ill and unable to bear children. According to a rumor, she was poisoned by Mikołaj Radziwiłł. She was buried in the Cathedral of the Theotokos in Vilnius.[3] 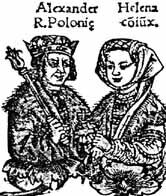