Familypedia
Register
Don't have an account?
Sign In
Advertisement
in: Whitney (surname), Born in 1765, Died in 1825,
and 18 more

Eli Whitney was an American inventor best known for inventing the cotton gin. This was one of the key inventions of the Industrial Revolution and shaped the economy of the Antebellum South. Whitney's invention made upland short cotton into a profitable crop, which strengthened the economic foundation of slavery in the United States. Despite the social and economic impact of his invention, Whitney lost many profits in legal battles over patent infringement for the cotton gin. Thereafter, he turned his attention into securing contracts with the government in the manufacture of muskets for the newly formed United States Army. He continued making arms and inventing until his death in 1825.

Whitney was born in Westborough, Massachusetts, on December 8, 1765, the eldest child of Eli Whitney Sr., a prosperous farmer, and his wife Elizabeth Fay, also of Westborough.

His 1817 marriage to Henrietta Edwards, granddaughter of the famed evangelist Jonathan Edwards, daughter of Pierpont Edwards, head of the Democratic Party in Connecticut, and first cousin of Yale's president, Timothy Dwight, the state's leading Federalist, further tied him to Connecticut's ruling elite. In a business dependent on government contracts, such connections were essential to success.

Whitney died of prostate cancer on January 8, 1825, in New Haven, Connecticut, just a month after his 59th birthday. He left a widow and his four children behind. During the course of his illness, he invented and constructed several devices to mechanically ease his pain. 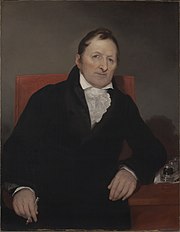