Eliza Knight (from Weston-Super-Mare) married George Burgess, a widower for nine years, on 28th Jun 1870 just after his 41st birthday. When their first two daughters were born, between the spring of 1871 and the end of 1872 they were living at Elicar Villa, Berkely Road, Horfield, Bristol. According to the census records of 1871 they had a servant, Hannah Bickley, unmarried, aged 24 years, and from Ireland. By the time his fourth daughter was born, at the end of 1875, they were living at South View, Latteridge, near Iron Action, Gloucestershire. 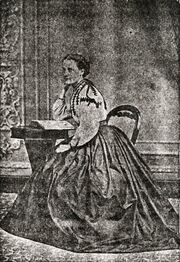