Elizabeth I of England ‡

Elizabeth I (7 September 1533 – 24 March 1603) was queen regnant of England and Ireland from 17 November 1558 until her death. Sometimes called The Virgin Queen, Gloriana or Good Queen Bess, Elizabeth was the fifth and last monarch of the Tudor dynasty.

At age 3, her father, King Henry VIII of England divorced and executed her mother, Anne Boleyn (c1501-1536), because of his disappointment with her inability to produce a male heir. This event led to his splitting off the Church of England from the Catholic Church in Rome.

At this death (1547) the throne passed to first Edward VI of England (1537-1553) who died 5 years later. Then it passed to his step-sister, Mary I of England (1516-1558) (aka: Bloody Mary) (daughter of Henry's 1st wife) who died barely one year later during which time, Elizabeth was locked in prison. Upon Mary's death the throne passed to Elizabeth (the then oldest legitimate child of Henry VII) and she reigned gloriously over England for nearly 45 years. She never married and had no issue. 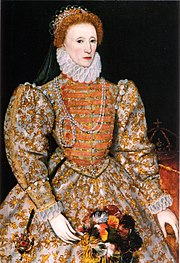