Familypedia
Register
Don't have an account?
Sign In
Advertisement
in: Chubbock (surname), Born in 1817, Died in 1854,
and 18 more

Emily Chubbuck Judson was an American poet who wrote under the pseudonym Fanny Forester.

Emily Chubbuck was born to poor parents in Eaton, New York on August 23, 1817. In 1834 she became a teacher and joined a Baptist church. In 1840 she entered the Utica female seminary and wrote her first book, Charles Linn, in 1841. She developed a literary friendship with Nathaniel Parker Willis, who she described as the foster-father of her intellect. Willis and Chubbuck first corresponded in June 1844 after her failed attempt at writing children's stories. She was published in Willis's New York Mirror, opening the door for contributions to other journals including The Columbian and Graham's Magazine.

In 1845, Chubbock met the author Horace Binney Wallace, whom she described as "a man of talent, a scholar, and a perfect gentleman". The two may have considered a romantic relationship before Wallace became aloof. She met Adoniram Judson (1788-1850) in December 1845 on his return to the United States. They married on June 2, 1846.

On July 11, 1846, the newlyweds sailed from Boston to Burma where Judson had been a missionary for many years. Chubbock at first disliked the lifestyle, where she became stepmother to her husband's two young sons and complained privately of "this taking care of teething babies" as being outside her usual literary role. While away from her reading audience, stories spread that she was unsuited for the missionary life and, gradually, her work fell out of favor.

The Judsons had a daughter named Emily Frances who was born in 1847. A son named Charles was born and died on the same day in 1850, three weeks after Judson's death at sea. After learning of his death, Chubbuck returned in poor health to the United States in 1851. She collected materials for Judson's biography that was written by Francis Wayland, then resumed writing herself.

Chubbock had three names she used to sign her published works, which correspond somewhat with the type of writing she did in those periods. "Emily Chubbock" was used in her early career mostly writing children's books, "Fanny Forester" in her period contributing to popular magazines, and "Emily Judson" during her missionary period and her later years.[5]

Chubbuck died of consumption in Hamilton, New York on June 1, 1854.

The Adoniram Judson Memorial is located at Plymouth Burial Hill in Plymouth, Massachusetts. However it is not their final resting place, multiple records indicate he was buried at sea off the coast of Burma. The names of other family members are recorded here. 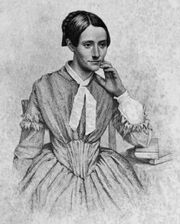