Familypedia
Register
Don't have an account?
Sign In
Advertisement
in: Pages with broken file links, Cities in Minnesota, Cities in Dakota County, Minnesota

Farmington is a city in Dakota County, Minnesota, United States. The population was 21,086 at the 2010 census.[4] It is a part of the Minneapolis-St. Paul metropolitan area.

Settlers began arriving in Empire Township, in which Farmington grew, in the early 1850s. The village of Dakota City began around the intersection of the Minnesota Central, Hastings, and Dakota railroads, and also the Vermillion River.[5] The popular city train station in Dakota City was Farmington Station and non-residents began confusing the two names and identifying the town as Farmington. The town's name was then permanently changed from Dakota City to Farmington. Farmington received its village charter in 1872 making Farmington the second oldest community in Dakota County after the county seat, Hastings.[6]

A notable event in Farmington's history is the movement of the Dakota County Fair to Farmington in 1869. Another event, the Great Fire of Farmington on November 22, 1879, destroyed several houses, stores, a hotel, and a grain elevator in the current downtown area.[7] [8] Farmington High School graduated its first class in 1884. Farmington was one of the first communities in the United States to offer rural free mail delivery in 1897.[6]

The town continued to grow throughout the twentieth century. The city celebrated its centennial in 1972. In the recent past, the city has expanded to include several suburban neighborhoods north of the original downtown area. Farmington is still separated by Lakeville to the north and west by farms. However, the community continues to be incorporated in the expanding suburbs of the Minneapolis-St. Paul metropolitan area.

Farmington is home to three properties listed on the Register of Historic Places for Dakota County: the Daniel F. Akin House, the Church of the Advent, and the Exchange Bank Building.[5] 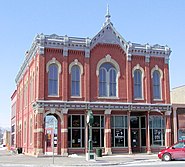 Farmington is the location of the Minneapolis Air Route Traffic Control Center (ZMP)[1] and a Marigold Kemps packing plant. Farmington is also home to the first entirely recycled Subway location.

Farmington borders the City of Lakeville to the west, Empire Township to the east, and the Townships of Castle Rock and Eureka to the south.

Farmington is host to The Dakota County Fairgrounds with entrances on 220th Street (Ash Street) and along Highway 3 (Chippendale Avenue). The Fairgrounds is the largest in area with 360 acres (1.46 km2) versus 300 for the next largest: The Minnesota State Fairgrounds. It also hosts the largest county fair attendance in the state, with average attendance now at 125,000 annually.

Farmington is a suburb of the Minneapolis/Saint Paul area and is largely of residential development. It can generally be divided into two (2) sections, the area of the town north of County Highway 50 and the area south of Highway 50. The area to the north has been widely developed in the last 18 years, while the area to the south is generally known as "Downtown" and has had only two major developments in the last 20 years. The third area of the city is the North-East Farmington/West Central Empire Township developments, with large areas of development in the recent 5 years. Farmington has many biking and walking trails integrated within its housing communities. The trail along the Vermillion River unites the downtown, uptown, and Empire Township neighborhoods.

There were 7,066 households of which 51.4% had children under the age of 18 living with them, 63.4% were married couples living together, 8.7% had a female householder with no husband present, 4.7% had a male householder with no wife present, and 23.2% were non-families. 17.7% of all households were made up of individuals and 4.7% had someone living alone who was 65 years of age or older. The average household size was 2.95 and the average family size was 3.38.

There were 4,169 households out of which 51.0% had children under the age of 18 living with them, 67.4% were married couples living together, 7.2% had a female householder with no husband present, and 21.9% were non-families. 16.7% of all households were made up of individuals and 6.0% had someone living alone who was 65 years of age or older. The average household size was 2.95 and the average family size was 3.35.

Farmington schools are operated by ISD 192 and currently enroll approximately 6,900 students.[10] The district range includes the cities of Farmington and the east portion of Lakeville, and the Townships of Castle Rock, Empire, and Eureka. The Farmington Senior High School mascot is Pouncer the Tiger and school colors are orange and black, with white occasionally included.