Familypedia
Register
Don't have an account?
Sign In
Advertisement
in: Van Holland (surname), Born in 1210, Died in 1234,
and 6 more

Floris IV, Count of Holland, succeeded his father in 1222. His regent was Baldwin of Bentheim. He acquired the Land of Altena. He had constant disputes with the bishop of Utrecht, Otto of Lippe, but helped him against the peasants of Drenthe in 1227. Floris was a real knight, who went on crusade against the Stedingers north of Bremen in 1234. He died at a French tourney, allegedly killed by the jealous husband of Mathilde de Boulogne. 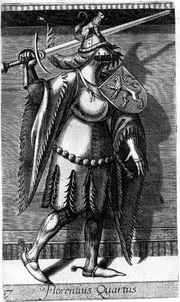