Edit
Not to be confused with Fort Clinton.

Fort Clinton was the main defensive garrison of the Revolutionary War defense network at West Point. Commanded by and named after Benedict Arnold before his betrayal of the Revolutionary Army and defection to the British, it was later renamed after General James Clinton. Construction was begun under Captain Louis de la Radiere,[1] and completed under the command of Tadeusz Kosciuszko between 1778–1780; it was the key defensive fort, overlooking the turn in the Hudson River and the Great Chain.[2] After the war, the remains of Fort Clinton fell into disrepair and were eventually demolished to make way for the expansion of the United States Military Academy, founded at the garrison in 1802. Today, all that remains of the fort are some earthworks and stone base structures, easily seen off of Thayer Road as it rounds the plain and the soccer fields at West Point.

In 1778, Maj. Gen. Israel Putnam wrote, "The place agreed upon to obstruct the navigation of Hudson river was at West Point." "As the governor's brother, Col. James Clinton, and his brigade would build the main fort, it was to be named after him." The southern and western walls were nine feet high and twenty feet thick. Three redoubts and batteries on the south were named Forts Meigs, Wyllys and Webb.[3]:53,55 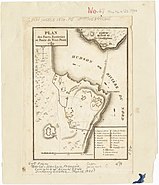 View of the remaining wall from Kosciuszko's Monument

Fort Clinton and the Great Chain