Edit
watch 01:36
We're Getting Mutants in the MCU - The Loop
Do you like this video?
Play Sound
“Fort Dodge” redirects here. For other uses, see Fort Dodge (disambiguation).

Fort Dodge traces its beginnings to 1850 when soldiers from the United States Army erected a fort at the junction of the Des Moines River and Lizard Creek. It was originally named Fort Clarke but was renamed Fort Dodge because there was another fort with the same name in Texas. It was named after Henry Dodge, a governor of Wisconsin Territory (which included Iowa at the time).[7][8]

The fort was abandoned in 1853 and the next year William Willams, a civilian storekeeper in Fort Dodge, purchased the land and buildings of the old fort. The town of Fort Dodge was founded in 1869. In 1872 the long and continuing history of gypsum production in Iowa started when George Ringland, Webb Vincent, and Stillman T. Meservey formed the Fort Dodge Plaster Mills to mine, grind, and prepare gypsum for commercial use. The Company constructed the first gypsum mill west of the Mississippi River, at the head of what is now Gypsum Creek.

There were 10,275 households of which 27.5% had children under the age of 18 living with them, 39.5% were married couples living together, 13.0% had a female householder with no husband present, 4.4% had a male householder with no wife present, and 43.1% were non-families. 36.8% of all households were made up of individuals and 14.4% had someone living alone who was 65 years of age or older. The average household size was 2.21 and the average family size was 2.89.

The major industries of Fort Dodge are biofuels, livestock feed, gypsum and limestone mining, drywall manufacturing, trucking, the manufacture of veterinary pharmaceuticals and vaccines, and retail.

Gypsum rock is processed into drywall and plaster products at several Fort Dodge manufacturing facilities. Drywall was patented by a Fort Dodge resident, and the gypsum used to create the Cardiff Giant hoax of the late 19th century was mined at Fort Dodge. Currently National Gypsum Company, Georgia Pacific Corporation, Celotex Corporation, and the United States Gypsum Company operate gypsum facilities in and around Fort dodge.

Fort Dodge is the home of Fort Dodge Animal Health (a division of Boehringer Ingelheim),[11] a major producer of pharmaceuticals and vaccines for veterinarian use, the company's headquarters were moved from Fort Dodge to Overland Park, Kansas in 1995. Two of the company's three USA manufacturing plants are located in Fort Dodge.

At least three major national trucking companies (primarily flatbed carriers serving the drywall industry) are based out of Fort Dodge.

Fort Dodge serves as a retail center for North-Central Iowa.

For most of the 20th century, meatpacking was a major industry in Fort Dodge. The last two large meatpacking plants (owned by Iowa Beef Processors and Hormel) closed during the 1980s. One of the laboratories of Fort Dodge Animal Health was built on the site of a former Hormel processing plant.

The Fort Museum and Frontier Village is located on the southwest edge of Fort Dodge. It is a full scale recreation of a military outpost on the prairie from the 19th century. It also features a recreated village from the same time period. Additionally, The Fort Museum has a replica of the Cardiff Giant, an archaeological hoax sculpted from gypsum mined at Fort Dodge. A "Frontier Days" event is held on the Fort Museum grounds every year. It features a parade, beauty pageant, historical reenactments, a buckskinner camp, and live entertainment. 2014 marked the 40th year of the event.

The Blanden Memorial Art Museum, the first public museum of art in the state of Iowa, is located in the historic Oak Hill district of Fort Dodge. The Blanden, opened June 5, 1932, is renowned as one of the finest small museums in the nation for its extensive permanent collection as well as popular touring exhibits.

The Lizard Creek Blues Society sponsors an annual blues festival, "Blues Under the Trees", every summer, drawing blues musicians from all over the United States.[13]

Theater and musical theater are historically popular arts activities in Fort Dodge, with the community maintaining three independent theater organizations. Hawkeye Community Theatre, one of the longest continually running theatre organizations in the state and puts on six full length productions a year of varied genre. Comedia Musica Players is a civic musical theater troupe that produces an annual musical every fall. Stage Door Productions provides theater training and performance opportunities for middle school, high school, and college-aged students during the summer and puts on one small cast (10 or fewer) production per year. 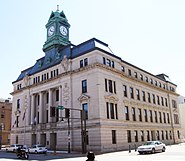 Oleson Park has woods and hiking trails. The town's recently restored band shell is located here. Oleson Park Zoo boasts a small zoo featuring a small population of albino white tailed deer and other animals. It is not an AZA (American Zoo and Aquarium Association) accredited zoo and the zoo's USDA license number 42-C-0128, has been cited over 15 times in the last 2 years by the USDA inspectors.

Snell-Crawford Park (located at Williams Drive and 12th Avenue North) is a local favorite for weekend recreation. It has a disc golf course, three sand volleyball courts, a jogging/walking/bicycling trail, picnic tables, and grills. Soldier Creek runs through the park.

John F. Kennedy Park is the nearest camping facility to Fort Dodge. It has a large campground, a lake with a swimming beach, a playground, and hiking trails. Lakeside Municipal Golf Course, an 18-hole course, is located here.

Fort Dodge is a top tubing destination in the state, offering the swift and clear waters of Lizard Creek, solitude on the Des Moines River from Fort Dodge to the Dolliver Memorial State Park, and the nearby lake at Brushy Creek.

Fort Dodge is the home to the central campus of Iowa Central Community College.

U.S. Highway 20 bypasses Fort Dodge to the south, and U.S. 169 skirts the west side of the city; both highways have business routes through town. Iowa Highway 7 has its terminus at the northwest edge of the city.

The Fort Dodge Regional Airport is located north of town. It is primarily a general aviation airport, but it does have daily direct flights to Lambert-St. Louis International Airport.

Jefferson Bus lines serves Fort Dodge with a link to Williams, Iowa, where travelers can connect to the expanded Jefferson line.