Hi, you may have heard that Wikia is updating its default skin to "Monaco" (skin info, features). This wiki is currently on the old Quartz skin (you may see it differently depending on your preferences). So we would like to switch you over. There are 7 color schemes to choose from:

Alternatively, you can choose to make a custom scheme, like Memory Alpha, Military Wikia, Rappelz or even (if you really want to see what can be done) UK Transport Wikia. For more examples, see here.

Any admin can set the scheme, just go to your preferences, choose the "skin" tab, and scroll down to the admin options section. For a custom scheme you will need to follow the instructions on the help page.

We need to make the switches soon, so if I don't hear from you, I'll change to Monaco Sapphire in a couple of days time. Then you can decide on your ideal scheme later. If you decide on a custom scheme, and need some help, then let me know! -- sannse (talk) 09:26, 4 August 2008 (UTC)

Sapphire looks too much like Wikipedia colouring. I don't like black panels. So my preferences are Jade and Smoke. But I will seldom see them. Robin Patterson 02:56, 6 August 2008 (UTC)

OK, that's two for Smoke, so I'll set to that - but let me know if you want help with something custom. And if you want to try any other variations, any admin can choose the Monaco colour scheme in their preferences. Thanks -- sannse (talk) 13:09, 6 August 2008 (UTC)
p.s. eeeeewwww to Slate ;) - sann

By the way, I noticed in changing the skin that the logo background doesn't match the background... so I had a go at tweaking it.

That's what friends are for. (Some readers may need to visit Facebook to understand that.) Robin Patterson 14:44, 6 August 2008 (UTC)

Who knows why it has been switching to Sapphire in the last couple of days? And why it says "Wikia Health " at top left? Robin Patterson 06:40, 25 August 2008 (UTC)

Could it be the difference between you being logged in and out? If you have "Sapphire" as your personal choice in your preferences, then that will override the default for you. On "health", the hubs are in the middle of being rearranged - possibly some will be in the wrong group at the moment... I'll ask Danny about this. -- sannse (talk) 10:24, 27 August 2008 (UTC)

Thank you. I doubt if I was logged out, but maybe that was the system logging me out (as has been complained of recently on Wikia-l) then reinstating me after a while. My personal choice is now Smoke (which I am really enjoying) but I let the Admins choose, so that should not have produced all those blue borders here. I did notice that the admin option on my prefs page was not Smoke, so I fixed it; then later it was wrong again, which is really why I asked here because I thought one of us was experimenting. No repetition in the last 24 hours. As for the Wikia Health, Genealogy was not in the health hub when I checked that; I noticed mention of two new hubs, but they were fairly distant from us in character/content; I will see what develops. Robin Patterson 12:00, 27 August 2008 (UTC)

Looks like AMK152 is experimenting :)
I checked with Danny, Genealogy is now in the "lifestyle" hub (which includes hobbies) but the labels need to be updated, so they are showing the wrong tag at the moment. It should show correctly soon -- sannse (talk) 17:26, 27 August 2008 (UTC)

Oops, I forgot to change it back to smoke when I was experimenting with the custom skin options to get a more perfect match. There is no option for me to preview skin so that it is my preference (under Prefrences>Skin, under Monaco, there is no "Custom" option.) In my opinion, the smoke doesn't match the color scheme. If you don't think the changes I made matches the color scheme do you have any other suggestions for color? I personally prefer the tan/brown colors rather than the bright yellow. Also, Phlox had put in a background image of people in the old Quartz skin that matchs the tan, [1] and I was going to apply that to the Monaco custom, but I don't know where to place it. -AMK152(talk • contribs) 11:22, 28 August 2008 (UTC)

OK. I'm not sure why you say "There is no option for me to preview skin" - I thought that's what http://help.wikia.com/wiki/Help:Customizing_skins#Can_I_customize_my_own_view.3F was about. Anyway, we seem to be moving into the next section, so I'll continue there. Robin Patterson 08:52, 29 August 2008 (UTC)

you can see how any page looks in a different skin by appending some things to the end of the url (take a look at the "preview" links for the different skins in the preferences). even though there is no preview link for the "custom" skin, you can make make your own, just replace the usetheme part of the url with custom.
a neat trick i use is something called a bookmarklet, a tiny piece of javascript code that lives entirely inside of a bookmark.

copy that text, and make a new bookmark with that text as the location. then no matter what page your on (sorta), you can just click that button to see the page in the custom skin without changing your skin preferences or the sites preferences. and yes, this will work even if the current site skin is set to smoke, because the custom skin css still exists.
i hope this helps --Uberfuzzy 09:17, 29 August 2008 (UTC)

Once the Smoke settles, those of us who care about the content that our visitors get led to may like to explore the customization options. Robin Patterson 14:44, 6 August 2008 (UTC)

The only two of us who bothered to reply to the original discussion said Smoke was among our two or three preferences. But tan/brown could be OK by me. Where do they come from? (I don't see them above.) Robin Patterson 08:52, 29 August 2008 (UTC) 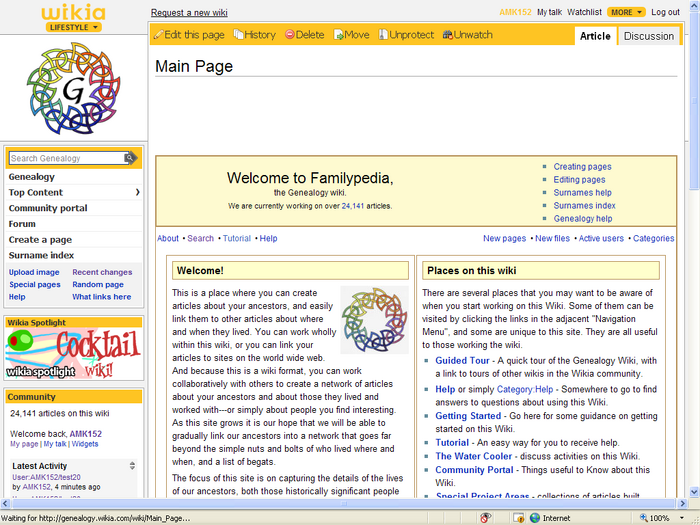 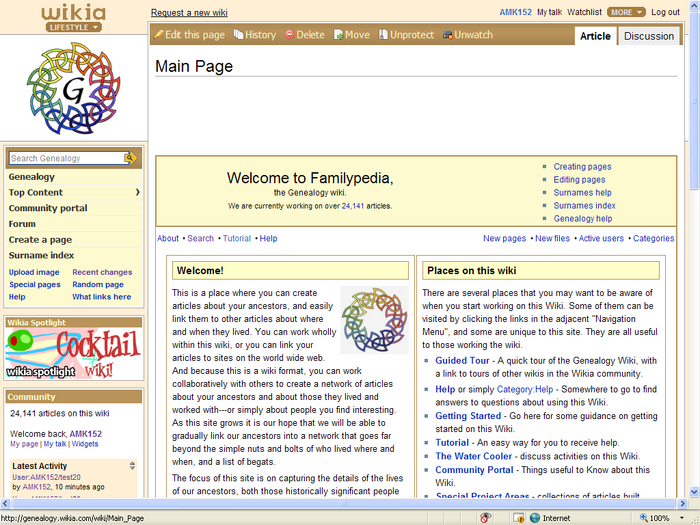 Still no answer to my question. But at least the "tan" has been displayed. Now where are those infoboxes for comparison? Robin Patterson 07:01, 6 October 2008 (UTC) 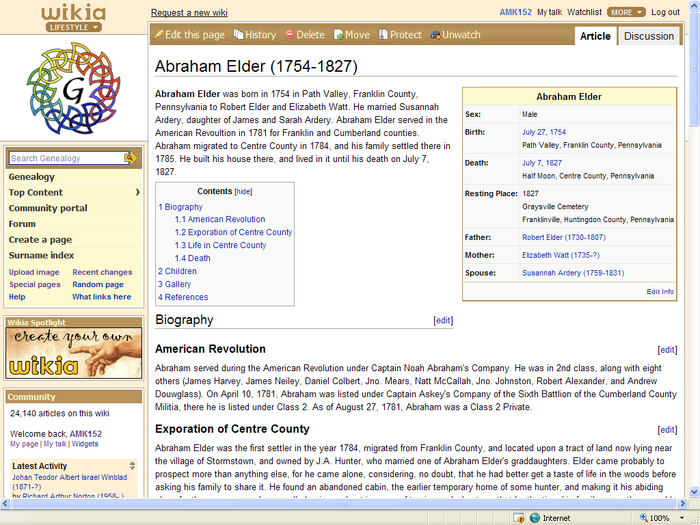 Thank you for screenshot of infobox page. Now I start to see what matches: not the brown/tan but the pale yellow of our infobox header cells and some of the main page panels, which matches the main sidebar panels. Almost convincing! And if you can dig up Phlox's background image that matches the tan we may have a deal. I may do some fiddling, but (by way of expanding my unanswered question) I would like to know exactly where to find specific colours before I try to fiddle with text of files. Robin Patterson 05:56, 7 October 2008 (UTC)
You mean this one below? -AMK152(talk • contribs) 20:06, 7 October 2008 (UTC)

Show me a wikia that currently is able to do a horizontal banner, and we can probably do it. Wookiepedia used to do a horizontal banner like this one I did for familypedia, but even they aren't doing one. Marvel wikia does have sidebars and I guess we could do that. Of course something less brash, just one one side. Maybe a subtle border both sides- hard to say without trying some stuff out.-~ Phlox 22:12, 12 June 2009 (UTC)

Fred doesn't like the brown, but has now been told that he can customize any colour for his own display. See Forum:Navigation boxes blue or pale yellow?. — Robin Patterson (Talk) 05:59, 12 June 2009 (UTC)

Huston, we have a problem[]

When I view a page like Elizabeth II of the United Kingdom (1926) using the default skin (eg not logged in), then the ad (or the blank space for the ad) often seems to cut off the top of the info box. I've seen that with various of my pages that use {{Showinfo person}}, but it is not consistent. Thurstan 22:55, 15 August 2008 (UTC)

Thurstan, could you let me know what browser and operating system you use please? And if it's possible to take a screenshot, that would be great. Many thanks -- sannse (talk) 11:19, 18 August 2008 (UTC)

Ok, screen shot at Image:Thurstan-Bug.JPG. I am running Windows XP (Home) and using Internet Explorer Version 6.0 on both the machines I use. I notice that Mozilla 1.2.1 (the only other browser I have handy) does not seem to have the problem. Thurstan 11:49, 18 August 2008 (UTC)

Yes, sorry about not making a note here. This fixes the issue in IE6 and I don't think it impacts other browsers too greatly. Please let me know if this isn't acceptable and we can work to find another solution. -- JSharp (talk) 19:34, 29 August 2008 (UTC)

I was led to believe that the standard ad space (top right) would be converted to a banner if it was going to interfere with a table. Not happening for me (on Firefox) with our most prominent table, the county navigation box. See http://genealogy.wikia.com/wiki/Category:Hart_County%2C_Georgia - the ads are in the top right corner leaving a big white expanse to their left. Other viewers get the same? Robin Patterson 00:50, 12 September 2008 (UTC)

I've added in an override which will cause only banner ads to appear so you'll no longer get that large white gap that you were getting with the box ad. -- JSharp (talk) 16:59, 16 September 2008 (UTC)

JSharp is welcome here any time! I think there are other boxes, e.g. Template:Search, that can use the same trick:

(without the space near the middle). I presume that we locals can attend to that when we notice them. Robin Patterson 03:58, 17 September 2008 (UTC)