Franklin Bake Doty was born April 8 1850 in Oxford Township, Butler County Ohio, the youngest child of Stephen and Rebecca (Bake) Doty. His mother was born in Indiana about 1808 to parents born in Germany. Franklin sometimes jokingly referred to himself as “half-baked”. Franklin was christened in the Methodist Church. According to a Davison family genealogy,[1] Franklin married Esther Ann Davison January 14, 1870. However, there is a record of a marriage between Franklin Doty and Esther Dawson January 17, 1871 in Union County Indiana.[2]. Esther was born June 24, 1854, in Jefferson County Indiana to William and Clarissa (Sithens) Davison. At the time of his father’s death in 1871 Franklin was living in Winnamac, Pulaski County Indiana. However, his stay in Winnamac must have been brief because his oldest child, Winnifred, was born in 1870 or 1871 in Ohio and his second child, Irene Josephine was born on January 20, 1872 in Oxford Township, Butler County Ohio and died July 4, 1883 in Winnamac. Franklin and Esther’s next five children were all born in Oxford Township, Butler County Ohio (Leuella 1874, Clinton Alfred 1876, Olive Eva 1877, Viola Zulema 1880, and Elmer Stephen 1882) Between the birth of Elmer on February 16, 1882 and the birth of his next child, Harry Asbury, on September 10, 1883, Franklin moved his family to Kane County Illinois., where the remainder of his 14 children were born (Sylvester Sylvanis 1885, Jessie Doloras 1886, Flossie Maud 1891, Daisey Esther 1895, and the twins Dewitt Fay and Nina May January 3, 1897). Sometime between 1892 and 1904 Franklin purchased a farm on present-day Tower Road just south of Barr Rd. on the western edge of Plato Township, Kane County, Illinois. Esther died in May ,1820, and is buried in South Burlington Cemetery, Kane County, Illinois. Franklin developed poor eye-sight and a doctor advised him not to have surgery. Franklin took the advice of a second doctor, had the surgery, and ended up blind. Thereafter he often used his granddaughter, Ruth Miller, to guide him, such as when he traveled by railroad to Omaha to visit his daughter Leuella Johnson. He chose Ruth for this task because he thought Ruth’s mother, Flossie Miller, preferred Ruth’s older sister Anna, and therefore gave Ruth more work than her older sister. In later life Franklin operated a milk processing plant with his son Clinton in Sycamore, Illinois. In 1930 he was living with his daughter Jessie Nesbitt in Sycamore, Illinois. Franklin died May 17, 1935, and is buried in South Burlington Cemetery. 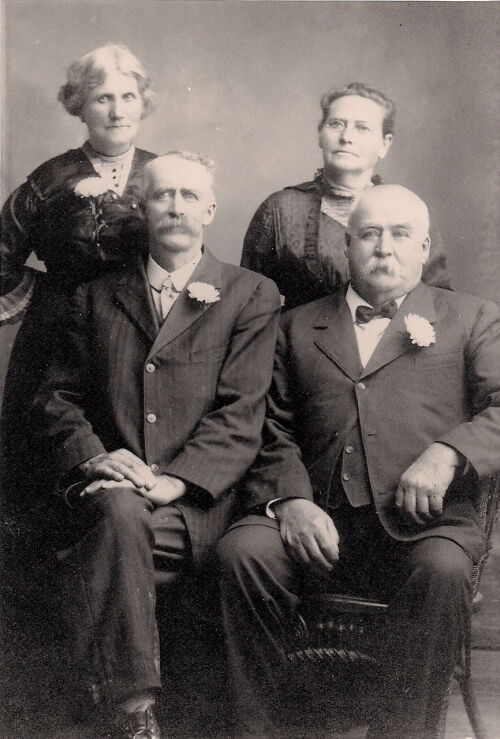 On the left is Esther Ann (Davison) Doty standing behind her husband Franklin Bake Doty. The couple on the right are unidentified. 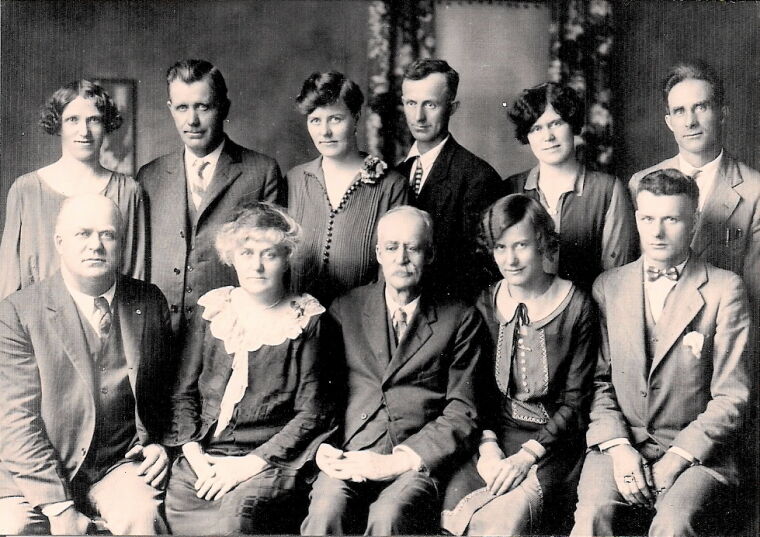 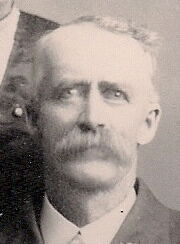