Familypedia
Register
Don't have an account?
Sign In
Advertisement
in: Oldenburg (surname), Born in 1808, Died in 1863,
and 15 more

He was the last Danish monarch of the older Royal branch of the House of Oldenburg and also the last king of Denmark to rule as an absolute monarch. During his reign, he signed a constitution that established a Danish parliament and made the country a constitutional monarchy. , , 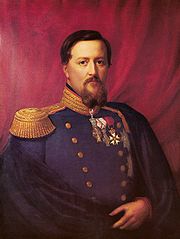