Familypedia
Register
Don't have an account?
Sign In
Advertisement
in: Friuli-Venezia Giulia, Regions of Italy, NUTS 2 statistical regions of the European Union,
and 3 more

Friuli–Venezia Giulia (Friulian: Friûl–Vignesie Julie, Slovene: Furlanija–Julijska krajina, German: Friaul–Julisch Venetien, Venetian: Friul–Venèxia Jułia) is one of the twenty regions of Italy, and one of five autonomous regions with special statute. The capital is Trieste. It has an area of 7,858 km² and about 1.2 million inhabitants. A natural opening to the sea for many Central European countries, the region is traversed by the major transport routes between the east and west of southern Europe. It encompasses the historical-geographical region of Friuli and the geographical region of Venezia Giulia (known in English also as Julian March), each with its own distinct history, traditions and identity.

Friuli–Venezia Giulia is Italy's most North-Eastern region. It covers an area of 7,858 km2 and is the fifth smallest region of the country. It borders Austria to the north and Slovenia to the east. To the south it faces the Adriatic Sea and to the west its internal border is with the Veneto region.

The region spans a wide variety of climates and landscapes from the mild Mediterranean climate in the south to Alpine continental in the north. The total area is subdivided into a 42.5% mountainous-alpine terrain in the north, 19.3% is hilly, mostly to the south-east, while the remaining 38.2% comprises the central and coastal plains.

Morphologically the region can be subdivided into four main areas.

The rivers of the region flow from the North and from Slovenia into the Adriatic. The two main rivers are the Tagliamento, which flows west-east in its upper part in the Carnic Alps and then bends into a north-south flow that separates the Julian Alps from Alpine foothills and the Isonzo (Soča slo.) which flows from Slovenia into Italy. The Timavo is an underground river that flows for 38 km from Slovenia and resurfaces near its mouth north-west of Duino.

The region Friuli–Venezia Giulia has a temperate climate. However, due to the terrain's diversity, it varies considerably from one area to another. Walled by the Alps on its northern flank, the region is exposed to air masses from the East and the West. The region receives also the southerly Scirocco from the Adriatic sea, which brings in heavy rainfall. Along the coast the climate is mild and pleasant. Trieste records the smallest temperature differences between winter and summer and between day and night. The climate is Alpine-continental in the mountainous areas, where, in some locations, the coldest winter temperatures in Italy can often be found. The Kras plateau has its own weather and climate, influenced, mostly during autumn and winter, by masses of cold air coming from the North-East. These generate a very special feature of the local climate: the north-easterly wind Bora, which blows over the Gulf of Trieste with gusts occasionally exceeding speeds of 150 km/h.

In Roman times, modern Friuli-Venezia Giulia was located within Regio X Venetia et Histria of Roman Italy. The traces its [ancient Rome|Roman origin]] are visible over all the territory. In fact, city of Aquileia, founded in 181 B.C., served as capital of the region and rose to prominence in the Augustan period.

Starting from the Lombard settlements (6th century), the historical paths of Friuli and Venezia Giulia begin to diverge. In 568, Cividale del Friuli (the Roman Forum Iulii (from which the name Friuli comes)) became the capital of the first Lombard Dukedom in Italy. In 774, the Franks, favoured the growth of the church of Aquileia and established Cividale as a March. In 1077, [Patriarchal State of Friuli|Patriarchate of Aquileia]] was given temporal power by the Holy Roman Emperors and this power was extended temporarily even to the east. But already in the 12th century Gorizia had actually become independent and Trieste, along with other coastal towns, organized itself as a free city-state.

In the 6th century A.D., the Alpine Slavs, ancestors of present-day Slovenes, settled the eastern areas of the region. They settled in the easternmost mountainous areas of Friuli, known as the Friulian Slavia, as well as the Kras Plateau and the area north and south from Gorizia. In the 12th and 13th century, they also moved closer to Trieste.

Friuli became Venetian territory in 1420, while Trieste and Gorizia remained under the Austrian Empire. Pordenone was a "corpus separatum", under Austrian influence until 1515, when it also fell under the Venetian rule. With the peace treaty of Campoformido in 1797, Venetian domination came to an end and Friuli was ceded to Austria. After the period of domination by Napoleon, which affected also Trieste and Gorizia, it again became part of the Austrian Empire and was included in the Lombard-Veneto Kingdom, while Gorizia was merged with the Illyrian Kingdom and Trieste, together with Istria, became part of the Austrian Coastal Region. The enlightened policy of the Austrian-Hungarian Empire in the 18th and 19th centuries encouraged an extraordinary economic flourishing, making Trieste the empire’s port. The fortunate outcome of the war of independence brought Friuli alone into the unified Kingdom of Italy.

After the First World War, in which this region was a main theatre of operations and suffered serious damage and loss of lives, the fates of these border lands were again united, although Venezia Giulia, in particular, was the subject of the explosion of contradictions regarding the borders.

The Second World War led to the Anglo-American Administration in Trieste until the border was fixed with the Memorandum of London in 1954 . When Trieste was reunited with Italy, the Autonomous Region of Friuli Venezia Giulia could finally be established .[2] The Italian Constitution assigns it the status of Region with a Special Statute, together with four other Italian regions. However, Friuli - Venezia Giulia obtained administrative autonomy and the special statute only in 1963. The reasons for this "constitutional delay" are interwoven with the international problems of the second postwar period and with those deriving from the region’s "diversity" – the different historical, ethnic, and linguistic components that go to make up this area. In 1975 the Treaty of Osimo was signed in Osimo, definitively dividing the former Free Territory of Trieste between Italy and Yugoslavia.

The economy of Friuli–Venezia Giulia is one of the most developed in the country. Its core is based on small- and middle-size enterprises (the so-called 'North-East model'), on specialized farming and on high-quality tourism with a significant inclination towards exports.[3]

Agriculture and farming maintain an essential role in the economy of the region and employed in 2001 around 95,000 persons. Its high quality products are exported not only within the country and Europe (fruit and vegetable, cheese) but have become known worldwide for their quality (cured ham and wines, especially white ones). Noteworthy is also the production of soy (third producer in Italy with more than 37,000 hectares cultivated in 2000) and timber production in Carnia.[3]

As mentioned above, the economy of the region is based on a widespread mosaic of small and medium-size enterprises; of particular importance are the four industrial districts where a multitude of such highly specialised enterprises are concentrated. These districts are centred around the towns of Manzano, San Daniele del Friuli (cured ham), Maniago (knives) and Brugnera (furniture). A number of large enterprises are also present in the region in both the industry and services sector. Some of these companies are world-leaders in their relevant sectors; such are Fincantieri (based in Trieste and in Monfalcone) for the construction of the world's largest cruise ships, Zanussi-Electrolux (Pordenone) in the production of electrical appliances and Assicurazioni Generali in Trieste, one of the leading insurance companies in the world.[3]

Again, in the services sector the city of Trieste plays a leading role (with knock-on effects on the other provincial capitals); it is in fact here that activities such as the regional government, large banking and insurance companies are concentrated. With its commercial Free Port, Trieste also plays an essential role in the trade sector: special custom regulations ensure exclusive financial conditions to operators. The Port of Trieste is today the most important centre worldwide for the trade of coffee and plays a strategic key role in trade with northern and eastern Europe-[3]

Although small in size, Friuli–Venezia Giulia has always been 'in the centre of Europe' and has played an important role in connecting Italy (and the Mediterranean) to Central and Eastern Europe. Its role will become even more strategic as a logistical platform with the imminent enlargement of the European Union. Hence the importance of the infrastructure network of the region, which can today be considered first rate in quality and diversity. The motorway network consists of more than 200 km that run from North to South and from West to East, perfectly connecting the region to Austria and Slovenia. The railway network consists of around 500 km of track, with the two twin-line 'backbones' Venice-Trieste and Trieste-Udine-Tarvisio-Austria. The motorway and railway networks are linked to the ports of Trieste, Monfalcone and Porto Nogaro, the three most northerly ports of the Mediterranean. Trieste, in particular, has a free port for goods since 1719. It is the Italian port with the greatest capacity for covered storage, with a surface area of more than 2 million square meters and 70 km of rail tracks. Intermodality is guaranteed by the [Cervignano] terminal, in operation since 1988, to serve the increasing commercial traffic between Italy and Eastern European countries. Lastly, the regional airport of Ronchi dei Legionari is situated 30 km from Trieste and 40 km from Udine and is closely connected to the motorway and railway networks. The airport offers regular national and international flights including destinations in Eastern Europe. The region is now placing much of its hopes for future economic development in the construction of a high speed European Transport Corridor n° V connecting Lion, Turin, Venice, Trieste, Ljubljana, Budapest and Kiev, so as to improve the traffic of goods and services with new EU partners.[3]

Population density is lower than the national average: In 1978 there were in total only 1'2245'611 inhabitants;[4] in 2008 it was in fact equal to 157.5 inhabitants per km2 (compared to 198.8 for Italy as a whole). However, density varies from a minimum of 106 inhabitants per km2 in the province of Udine to a maximum of 1,144 inhabitants per km2 in the province of Trieste. The negative natural balance in the region is partly made up by the positive net migration. To some extent the migratory surplus has in fact offset the downward trend in the population since 1975. In 2008, the resident population with foreign nationality registered in the region accounted to 83,306 persons (6.7% of the total population).

Apart from Italian, the Friulian language is spoken in most of the region — with a few exceptions, most notably Trieste . In the Province of Udine, Slovene dialects are spoken in the area known as Venetian Slovenia, which comprises the Resia Valley and in the upper valleys of the rivers Torre and Natisone, with many villages having both Italian and Slovene names. A small Carinthian Slovene community also exists in the Val Canale on the border with Austria, especially in the municipalities of Malborghetto Valbruna and Tarvisio. In the Province of Udine, Slovene has only been officially recognized as a minority language since 2001, and there are few bilingual public schools, mostly located in the southern area, close to the Province of Gorizia. Estimates on the Slovenes in the region vary greatly, from 52,000 up to 183,000.[5][6] Most probably, the actual number of Slovene speakers is somewhere between 70,000 and 85,000, that is between 5,5% and 7% of the region's population.[7][8]

The number of native German speakers in Friuli–Venezia Giulia is estimated to be around 2,000. They live in the Val Canale (municipalities of Tarvisio, Malborghetto Valbruna and Pontebba), which is adjacent to Austria, and in the municipality of Sauris and the frazione of Timau (Tischlbong in the local Germanic language) (municipality of Paluzza), which each form a language exclave.

PdL gained 53.8% of Friuli–Venezia Giulia's votes at the Italian general election in 2008. The region's local government, led by President Renzo Tondo, is center-right. 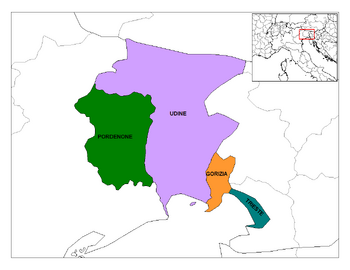 Twenty most common surnames in the Friuli–Venezia Giulia region.