listen); German: Glogau, rarely Groß-Glogau, Czech: Hlohov) is a town in southwestern Poland. It is the county seat of Głogów County, in Lower Silesian Voivodeship (since 1999), and was previously in Legnica Voivodeship (1975–1998). Głogów is the sixth largest town in the Voivodeship; according to the 2004 census estimate the town had a total population of 71,686. The name of the town derives from głóg, the Polish name for hawthorn.

Among the oldest towns in Poland, Głogów was founded in the 10th century as a Piast defensive settlement and obtained city rights in the 13th century from Duke Konrad I. Due to the town's strategic location on several trade routes, the townspeople received many privileges and benefits, which brought wealth and greatly reflected on the city's architecture. Over time, Głogów grew to be one of the largest fortified towns in Lower Silesia. The demolition of fortifications at the beginning of the 20th century improved the chances for further growth. However, towards the end of the Second World War Głogów was once again turned into a defensive fortress and as such suffered almost complete destruction.[2]

Currently reconstruction works are being carried out with the aim of restoring the historic pre-war appearance of the town. The castle, which was rebuilt between 1971 and 1983, now houses the Historical and Archaeological Museum. Since 1984 the town also has been the venue for the Głogów Jazz Festival, which features local and international singers, musicians and performers.[3]

Głogów is one of the oldest towns in Poland. It was founded as a grad by a West Slavic tribe called the Dziadoszanie, one of the Polish tribes. In the 10th century it became part of the emerging Polish state under first historic ruler Mieszko I of Poland, who erected a new stronghold there.[4] The first known historic record comes from 1010, in Thietmar of Merseburg's chronicles,[5] after the troops of King Henry II of Germany in the conflict over the March of Lusatia and the Milceni lands had attacked the forces of the Polish Duke Bolesław I Chrobry and again besieged Głogów on August 9, 1017 without result. The next year Henry and Bolesław concluded the Peace of Bautzen.

In 1109 Henry V, Holy Roman Emperor entangled in the fratricidal war between the Piast dukes Bolesław III Wrymouth and Zbigniew besieged the town, but could not overcome the Polish forces in the Battle of Głogów. In 1157 the town finally fell to the forces of Emperor Frederick I Barbarossa, invading the Silesian lands in aid of Duke Władysław II the Exile and his sons.

In 1180, under the rule of Władysław's II youngest son Konrad Spindleshanks, Głogów was rebuilt and became the residence of his principality, which fell back to the Duchy of Silesia upon his death about 1190. In the course of the fragmentation under Duke Bolesław II the Bald and his younger brother, the Duchy of Głogów under Duke Konrad I was established in 1251. Two years later he vested the town with Magdeburg rights. From the 13th century the city prospered thanks to trade and craft, brewing and clothmaking developed.[6] Likewise the many Duchies of Silesia, Głogów also fell under the overlordship of King John of Bohemia in 1329.

In 1504 century, the Głogów line of the Silesian Piasts died out with the death of Jan II the Mad. Jan's cruel measures had provoked the resistance of the Głogów citizens, and in 1488 the troops of King Matthias Corvinus appeared at the city gates and expelled the duke. In 1491–1506 Głogów was ruled by John Albert and Sigmund the Old, future kings of Poland.

In 1506 the duchy was incorporated into the Bohemian Kingdom, although Polish King Sigismund I the Old still claimed the duchy before renouncing claims in 1508,[7] while his wife, Polish Queen Bona Sforza still made attempts to reintegrate the city and the duchy with the Kingdom of Poland in 1522, 1526 and 1547.[4] Nevertheless, it remained part of Bohemia under the rule of the Jagiellonian dynasty until 1526, when it was inherited by the Austrian House of Habsburg and was incorporated into the Habsburg Monarchy. During the Thirty Years' War, Głogów was turned into a stronghold in 1630. It was conquered by Protestants in 1632, reconquered by Imperial troops in 1633, fell to Sweden in 1642, and finally reverted to the Habsburgs in 1648.

One of two main routes connecting Warsaw and Dresden ran through the city in the 18th century and Kings Augustus II the Strong and Augustus III of Poland traveled that route many times.[8] Głogów remained part of the Habsburg-ruled Crown of Bohemia until the First Silesian War. In March 1741 it was captured in a brilliant night attack by the Prussian Army under General Prince Leopold II of Anhalt-Dessau, and like the majority of Silesia became part of Prussia under King Frederick II. The city became known by the Germanized name of Groß-Glogau ("Greater Glogau") to differentiate it from the town of Oberglogau ("Upper Glogau", present-day Głogówek) in Upper Silesia. Despite Germanisation attempts, the population of the area around Głogów was still largely Polish.[6]

During the Napoleonic Wars, the Polish forces of General Jan Henryk Dąbrowski were stationed in Glogau, and the city was also visited three times by Napoleon Bonaparte. Glogau was captured by French forces after the Battle of Jena in 1806. The town, with a garrison of 9,000 French troops, was besieged in 1813–14 by the Sixth Coalition; by the time the defenders surrendered on 10 April 1814, only 1,800 defenders remained.

Because the stronghold status had slowed down the city's development for many years, the citizens tried to abolish the stronghold status in the 19th century; the fortifications were only moved to the east in 1873, and finally taken down in 1902, which allowed the city to develop. After 1871 the city was part of Germany, within which it remained after the Treaty of Versailles of 1919.[6] In 1939 it had 33,000 mostly German inhabitants. During World War II, the Germans established six forced labour camps in the city, a transit camp for Polish children intended for Germanisation, as well as a transit camp for Poles transported from the transit camp in Pruszków near Warsaw after the suppression of the 1944 Warsaw Uprising.[6] The town was made into a stronghold by the German government early in 1945 in the last stages of World War II. Glogau was besieged for six weeks by the Soviet Red Army, which left 98% of the buildings completely destroyed[1].

After May 1945 the city and the majority of Lower Silesia fell into the Soviet Zone of Occupation who expelled its German population and began replacing them with Polish settlers who came to the once again Polish city of Głogów to find a seriously war-damaged town; it has not been fully rebuilt to this day. The town started to develop again only in 1957,[4] after a copper foundry was built there. It is still the largest industrial company in the town. In 1974, Głogów was awarded the Order of Polonia Restituta, one of the highest Polish state decorations.[9] 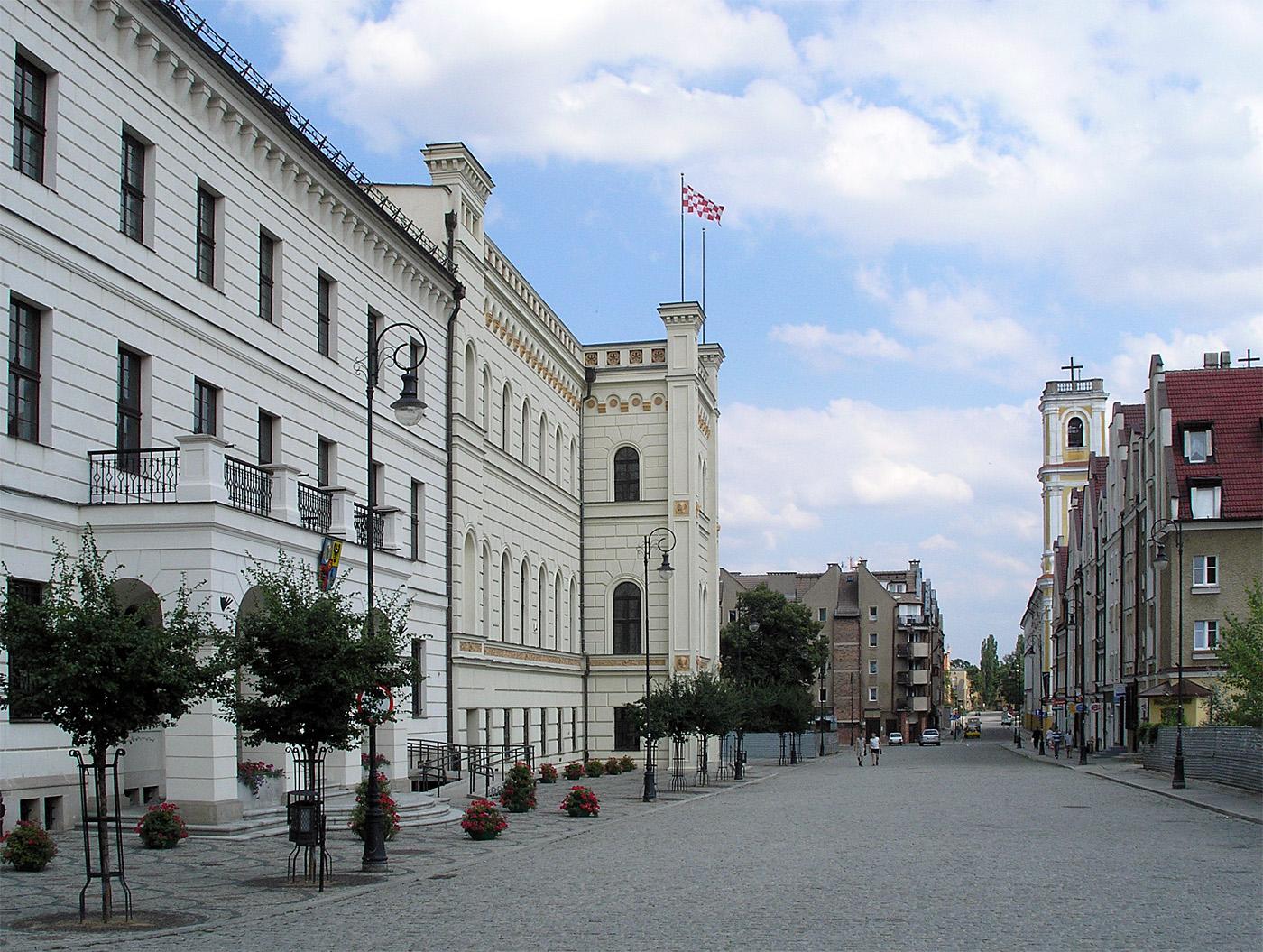 Market Square with the town hall

Głogów is twinned with:[10]