Familypedia
Register
Don't have an account?
Sign In
Advertisement
in: Hohenzollern (surname), Born in 1539, Died in 1603,
and 7 more

George Frederick reigned in his native Ansbach, Franconia and Jägerndorf, Upper Silesia since 1556 and, after the death of his cousin Albert Alcibiades in 1557, also in Kulmbach. He took over the administration of the Duchy of Prussia in 1577, when the then-reigning Duke Albert Frederick became ill.

He was the last of the older Franconia line of the House of Hohenzollern. Upon his death Ansbach and Kulmbach were inherited by younger princes of the Brandenburg line according to the House Treaty of Gera of 1598.

George Frederick rebuilt the palace and fortress Plassenburg, which was destroyed after the second margravian war (1552–1554), as one of the most impressive residences of the renaissance in the German empire. He also built the fortress Wülzburg and the old palace in Bayreuth.

During his reign between 1557 and 1603 in the Franconian territories of the Hohenzollern (Brandenburg-Ansbach and Brandenburg-Kulmbach) he kept peace, rebuilt cities and Castles, founded several schools and a University. 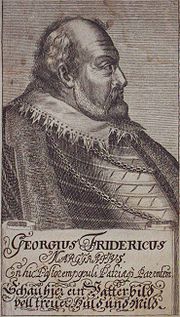