Familypedia
Register
Don't have an account?
Sign In
Advertisement
in: Gordon (surname), Born in 1743, Died in 1800, Stubs

Charles and George and their widowed mother moved to Wilkes County, North Carolina, in 1770 (according to George's headstone) or about 1774 (according to the family website).

George was born near Fredericksburg in 1743. He moved in 1770 from Virginia to what was then known as Mulberry Fields, the present site of Wilkesboro North Carolina. He fought in The Revolutionary War in Lenoir's Rangers. He is listed in orders from the then Captain William Lenoir to Colonel Ben J. Cleaveland as being among a company of fifty Light Horse to take a ton of lead from Creswell Mines to Salisbury. The orders are dated June 10th 1780. He also appears in a list of men that went to "the Old Store and to the Catawba" in February 1781.[1] Afterward he acquired large landholdings. They were buried at their house site, and moved to the graveyard of St. Paul's Episcopal Church in North Wilkesboro, North Carolina


This page is a "stub" and could be improved by additions and other edits. 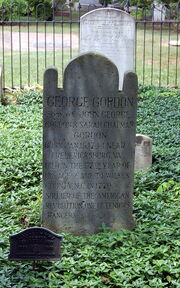