Familypedia
Register
Don't have an account?
Sign In
Advertisement
in: McGhee (surname), Born in 1925, Died in 2000,
and 13 more

Born in Los Angeles, California, he joined the United States Navy in 1942. McGhee was honorably discharged as an aircraft radioman third class in 1945. He earned his associate degree in art from Los Angeles City College in 1949. McGhee earned his bachelor of arts degree fromLos Angeles State College in 1951. He worked as a teacher for the Los Angeles Unified School District while earning a master of science in education and guidance (1958) at the University of Southern California. His dissertation “The Gifted Child” attempted to identify and classify gifted children.

In 1963, he received an honorary doctorate extramurally from the International Free Protestant Episcopal University (UK) in Clinical Psychology for his work in Marriage, Family, and Child Counseling and gifted children. He also received an honorary fellowship from Saint Andrew’s Ecumenical Church Foundation (UK). In 1979 he earned his doctorate in leadership and human behavior from United States International University in San Diego.

In 1963 he successfully lobbied the state legislature to pass a comprehensive bill (AB 2374) that established the first law governing the practice of Marriage and family therapy in the State of California. In 1964 he became one of the founders, originators, and first president of the California Association of Marriage and Family Therapists (currently over 30,000 members).

He practiced Family Therapy and Human Behavioral psychology in Arizona, California, New Mexico, Texas, and with the United States Government. He was in private practice as a marriage and family therapist (1964 to 2000). He had a massive stroke at his second home in Tennessee in early November, 2000. He died due to complications arising from the stroke on December 20, 2000 at the VA hospital in Loma Linda, California. 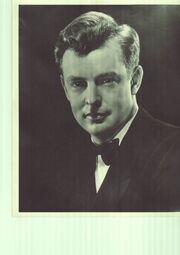