Familypedia
Register
Don't have an account?
Sign In
Advertisement
in: Wettin (surname), Born in 1895, Died in 1952,
and 66 more

King of the United Kingdom

As the second son of George V of the United Kingdom (1865-1936), he was not expected to inherit the throne and spent his early life in the shadow of his elder brother, Edward. He served in the Royal Navy during World War I, and after the war took on the usual round of public engagements. He married Lady Elizabeth Bowes-Lyon in 1923, and they had two daughters, Elizabeth (who succeeded him as Queen Elizabeth II) and Margaret. 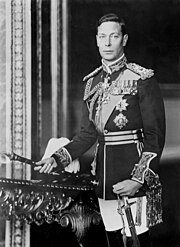