Familypedia
Register
Don't have an account?
Sign In
Advertisement
in: Washington (surname), Born in 1732, Died in 1799,
and 56 more

Edit Facts
George Washington (February 22, 1732 – December 14, 1799) Before becoming one of the major founding fathers of the nation, as well as president, Washington led the Continental Army to victory over the Kingdom of Great Britain in the American Revolutionary War (1775–1783). 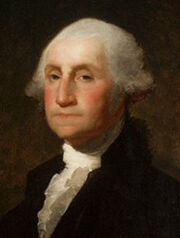