Familypedia
Register
Don't have an account?
Sign In
Advertisement
in: Romney (surname), Born in 1907, Died in 1995,
and 33 more

George Wilcken Romney (1907-1995) Governor of Michigan and 3rd Secretary for US Department of Housing and Urban Development. Father of US Presidential Candidate, Mitt Romney.

An excellent biography for George is already presented on Wikipedia. This article will focus on Family History.

Romney's parents were American citizens Gaskell Romney (1871–1955) and Anna Amelia Pratt (1876-1926); natives of Utah, they married in 1895 in Mexico and lived in Colonia Dublán, Galeana, in the Mexican state of Chihuahua (one of the Mormon colonies in Mexico) where George was born on July 8, 1907. They practiced monogamy. George had three older brothers, two younger brothers, and a younger sister. Gaskell Romney was a successful carpenter, house builder, and farmer who headed the most prosperous family in the colony.

When he died, he was survived by his wife, his children, 23 grand children and 33 great-grandchildren. 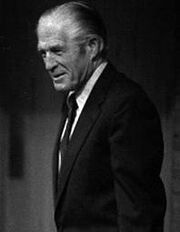