Familypedia
Register
Don't have an account?
Sign In
Advertisement
in: Spencer (surname), Born in 1757, Died in 1806,
and 9 more

The Duchess of Devonshire was a celebrated beauty and a socialite who gathered around her a large circle of literary and political figures—a salon. She was also an active political campaigner in an age when women's suffrage was still over a century away. The Spencers and the Cavendishes were Whigs. The Duchess of Devonshire campaigned for the Whigs—particularly for a distant cousin, Charles James Fox—at a time when the King (George III) and his Ministers had more direct influence over the House of Commons, principally through their power of patronage. During the 1784 general election, the Duchess was rumoured to have traded kisses for votes in favour of Fox and was satirised by Thomas Rowlandson in his print "THE DEVONSHIRE, or Most Approved Method of Securing Votes".

Famously, when she was stepping out of her carriage one day, an Irish dustman exclaimed: "Love and bless you, my lady, let me light my pipe in your eyes!”, a compliment which she often recalled whenever others complimented her by retorting, "After the dustman's compliment, all others are insipid."[1][2]

In 1779, she anonymously published the epistolary novel The Sylph.

Lady Georgiana Spencer married the Duke of Devonshire on her seventeenth birthday: 7 June 1774.

The Duchess introduced the Duke to her best friend, Lady Elizabeth Foster, and lived in a ménage à trois with them for the next 25 years. Lady Elizabeth had two children by the Duke, a son (Augustus William James Clifford) and a daughter (Caroline Rosalie St Jules).

The Duchess of Devonshire is famous not only for her marital arrangements, her catastrophic affairs, her beauty and sense of style, and her political campaigning, but also for her love of gambling. She was reported to have died deeply in debt, even though her own family, the Spencers, and her husband's family, the Cavendishes, were immensely wealthy. She died on 30 March 1806, aged 48, from what was thought to be an abscess of the liver; she was buried at All Saints Parish Church (which is now Derby Cathedral). At her death, she owed today's equivalent of £3,720,000.[3] The Duchess was so petrified of her husband discovering the extent of her debts that she kept them secret; the Duke only discovered the extent of her debts after her death and remarked, "Is that all?"[3]

During her years in the public eye, Georgiana was painted by Thomas Gainsborough and Joshua Reynolds. Gainsborough's famous painting of her in a large black hat (a style which she made sensationally fashionable, and came to be known as the 'Gainsborough' or 'portrait' hat) was lost for many years. It had been stolen from a London art gallery by Adam Worth then somehow restored to Agnew's Art Gallery by Allan Pinkerton of the American detective agency Pinkerton's. It turned up again at Sotheby's a decade ago and was purchased by the 11th Duke of Devonshire for the Chatsworth collection.

The Duchess of Devonshire managed to keep a "natural relationship"[4] with the Queen of France, Marie Antoinette; the similarity of the lives they led is often observed.

Contrary to popular belief, the play The School for Scandal was not written about the Duchess of Devonshire's scandalous affairs. Despite interacting with Sheridan, the playwright, the inspiration for the play's various characters came from actors Sheridan knew personally.

The Duchess of Devonshire by Thomas Gainsborough, 1783

The Duchess of Devonshire by Joshua Reynolds, 1786

The Duchess of Devonshire by Thomas Gainsborough, 1787. From the Devonshire Collection. 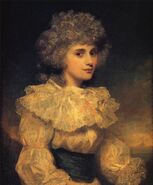 Elizabeth Foster's second husband, with whom she lived from 1782 on: William Cavendish, 5th Duke of Devonshire 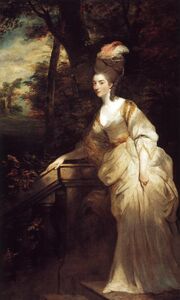