He was the son of Gheorghe I. Tașcă, a local landowner and philanthropist.

He was professor of political economy and rector (1929–1931) of the Academy of High Commercial and Industrial Studies of Bucharest (now the Bucharest Academy of Economic Studies). He was also corresponding member of the Romanian Academy. He was arrested in 1950 by the Communist authorities and died on March 25, 1951 in the Sighet prison, Maramureș County Romania.

In 1927, Gheorghe Tașcă purchased the estate of Pochidia from Constanța Cantacuzino

Gheorge Tașcă was also one of the ktitors of the Church of the Birth of the Mother of God in Pochidia, built in 1937. [2] 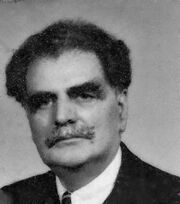