Grand Forks County is a county in the U.S. state of North Dakota. As of the 2020 census, its population was 73,170,[1] making it the third-most populous county in North Dakota. Its county seat and largest community is Grand Forks.[2]

Using territory annexed from Pembina County, the Dakota Territory legislature created Grand Forks County on January 4, 1873. Its governing structure was not established at that time, nor was the territory attached to another county for administrative and judicial purposes. The government was organized on March 2, 1875.

The University of North Dakota has established a Field Biology Station on Forest River, at the county's northern border. In 2013 it partnered with ND Game & Fish Department to establish a 160-acre (0.65 km2) wildlife management area at the station, to monitor whitetail deer activity in the forest.[8] The field station is tasked with identifying plants native and endemic to the area. A total of 498 plants have been collected at the Forest River Biology Station and Wildlife Management Area.[9] 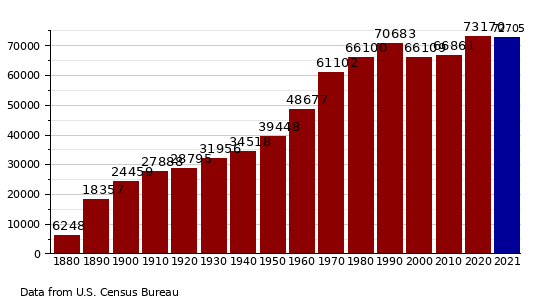 Grand Forks County voters historically vote Republican. In only one national election since 1964 has the county selected the Democratic Party candidate.