Edit with form
watch 01:36
We're Getting Mutants in the MCU - The Loop
Do you like this video?
Play Sound
Main
tree

Hannah Adams (October 2, 1755 – December 15, 1831) was an author of books on comparative religion and early US History, born in Medfield, Massachusetts and died in Brookline. She was the first woman in the United States who worked professionally as a writer.

She was the second of five children born to Thomas Adams (1725-1812) and Elizabeth Clark. Her mother died when Hannah was 11 years old. Showing at an early age a fondness for study, she acquired a fair knowledge of Ancient Greek and Latin from divinity students boarding with her father, who was himself a man of literary tastes.

He became bankruptcy when she was in her seventeenth year, and she and her brothers and sisters were obliged to provide for themselves. During the Revolutionary War she supported herself by making lace, and afterward by teaching..[1] Adams was a woman of varied learning and indomitable perseverance. She was a popular guest in New England society, and once stayed for two weeks at the house of her distant cousin, President John Adams (1735-1826).

Her writings brought her little money, yet they secured her fame and many friends, first among them the Abbé Grégoire, with whom she carried on an extensive correspondence. The quality of her scholarship also earned her the respect and friendship of several prominent Boston intellectuals, most notably William Shaw and Joseph Stevens Buckminster. These men would soon establish the Anthology Society, precursor to the Boston Athenæum, and become Adams’s lifelong allies and patrons, establishing in 1809 a modest annuity that would keep her out of poverty.[1] It was through the sponsorship of these gentlemen that aided her in preparing her History of the Jews (1812).[1]

Adams was the first professional author to be a member of the Boston Athenæum, where some of her letters, early editions of her books and her portrait by Chester Harding are kept.[2] Her autobiography, edited with additions by Mrs. Hanah F. Lee, was published in Boston in 1832.[1] She described herself as a Unitarian Christian.[1]

Her birthplace is preserved in Medfield. Her remains were interred at Mount Auburn Cemetery in Cambridge, Massachusetts on November 12, 1832. Her monument "erroneously proclaims" that she was the cemetery's "First Tenant," but she was, in fact, the ninth.[3] 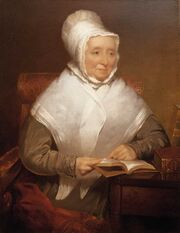