Harghita county has the highest percentage of Hungarians in Romania, just ahead of Covasna county. The primary Hungarian group, the Székely (Szeklers, Secui in Romanian), form the majority of the population in most of the county's municipalities, with Romanians concentrated in the northern and eastern part of the county (particularly Topliţa and Bălan), as well as in the enclave of Voşlăbeni.

The Székely of Harghita are mostly Roman Catholic, with Reformed and Unitarian minorities, while the ethnic Romanians are primarily Orthodox. By religion, the county is divided roughly as follows: 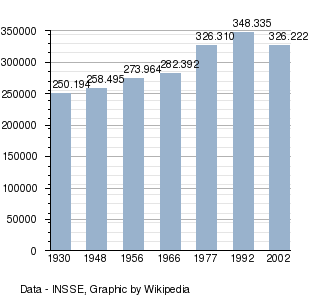 Harghita consists primarily of mountains, connected to the Eastern Carpathians, such as the Ciuc and Harghita Mountains; volcanic plateaux, foothills, and the more densely populated river valleys.

The mountains are volcanic in origin, and the region is known for its excellent hot mineral springs. Harghita is known as one of the coldest regions in Romania, although summers can be quite warm.

It is in this county that two of the most important rivers in Romania, the Mureş and the Olt, originate. These rivers' origins, near the villages of Izvoru Mureşului and Sândominic, are only a few miles apart; yet the Mureş flows west to the Tisza, while the Olt flows south to the Danube. In the western part of the county the two Târnava rivers (Târnava Mare and Târnava Mică) flow to the Târnava Plateau, which is part of the Transylvanian Plateau.

Harghita's spectacular natural scenery includes Sfânta Ana Lake, a volcanic crater lake near the town of Băile Tuşnad; Lacul Roşu a mountain lake in the northeast near the town of Gheorgheni, and Cheile Bicazului, a dramatic, narrow canyon formed by the Bicaz stream. The county is renowned for its spa resorts and mineral waters.

The main tourist attractions in Harghita county are

The Harghita County Assembly has 31 members: