Familypedia
Register
Don't have an account?
Sign In
Advertisement
in: Pages with non-numeric formatnum arguments, Hawaii (island), Geography of Hawaii (island),
and 2 more

The island is often referred to as the Island of Hawaiʻi,[4] the Big Island, the Big I, or Hawaiʻi Island to distinguish it from the state. Administratively, the whole island encompasses Hawaiʻi County.

As of the 2010 Census the population was 185,079.[5] The county seat and largest city is Hilo. There are no incorporated cities in Hawaiʻi County (see List of counties in Hawaii).[6]

Hawaiʻi is said to have been named after Hawaiʻiloa, the legendary Polynesian navigator who first discovered it. Other accounts attribute the name to the legendary realm of Hawaiki, a place from which some Polynesian people are said to have originated, the place where they transition to in the afterlife, or the realm of the gods and goddesses. Captain James Cook, the English explorer and navigator who was captain of the first European expedition that discovered the Hawaiian Islands, called them the "Sandwich Islands" after his patron, the Earl of Sandwich.[7] Cook was killed on the Big Island at Kealakekua Bay on 14 February 1779, in a mêlée which followed the theft of a ship's boat.[8]

Hawaiʻi was the home island of Paiʻea Kamehameha, later known as Kamehameha the Great. Kamehameha united most of the Hawaiian islands under his rule in 1795, after several years of war, and gave the kingdom and the island chain the name of his native island.[9]

At its greatest dimension, the island is 93 miles (150 km) across. It has a land area of 4,028 square miles (10,430 km2)[12] comprising 62% of the Hawaiian Islands' land area. Measured from its sea floor base to its highest peak, Mauna Kea is the world's tallest mountain, taller than even Mount Everest, since the base of Mount Everest is above sea level.[13]

Ka Lae, the southernmost point in the 50 states of the United States, is on Hawaii. The nearest landfall to the south is in the Line Islands. To the northwest of the island of Hawaii is the island of Maui, whose Haleakalā volcano is visible from Hawaii across the Alenuihaha Channel.

A view of the Kohala Coast and adjacent volcanoes, taken from the slopes of Kohala Mountains about 6 miles (10 km) northwest of Kawaihae. From left to right: Mauna Kea, Mauna Loa, and Hualalai.

The island of Hawaiʻi is built from five separate shield volcanoes that erupted somewhat sequentially, one overlapping the other. These are (from oldest to youngest):[14]

Geological evidence from exposures of old surfaces on the south and west flanks of Mauna Loa led to the proposal that two ancient volcanic shields (named Ninole and Kulani) were all but buried by the younger Mauna Loa.[15] Geologists now consider these "outcrops" to be part of the earlier building of Mauna Loa.

Because Mauna Loa and Kīlauea are active volcanoes, the island of Hawaii is still growing. Between January 1983 and September 2002, lava flows added 543 acres (219.7 ha) to the island. Lava flowing from Kīlauea has destroyed several towns, including Kapoho in 1960, and Kalapana and Kaimū in 1990. In 1987 lava filled in "Queen's Bath", a large, L-shaped, freshwater pool in the Kalapana area.

The Great Crack is an 8-mile-long (13,000 m), 60-foot-wide (18 m) and 60-foot-deep (18 m) fissure in the island, in the district of Kau. According to the United States Geological Survey (USGS), the Great Crack is the result of crustal dilation from magmatic intrusions into the southwest rift zone of Kilauea.[18] While neither the earthquake of 1868 nor that of 1975 caused a measurable change in the Great Crack, lava welled out of the lower 10 kilometres (6 mi) of the Great Crack in 1823.[18]

Visitors can find trails, rock walls, and archaeological sites from as old as the 12th century around the Great Crack. Approximately 1,951 acres (789.5 ha) of private land were purchased during the presidency of Bill Clinton, specifically to protect various artifacts in this area, as well as the habitat of local wildlife.

The Hilina Slump is a 4,760-cubic-mile (19,800 km3) chunk of the south slope of the Kīlauea volcano which is slipping away from the island. Between 1990 and 1993, Global Positioning System (GPS) measurements showed a southward displacement of about 10 centimetres (4 in) per year.[19] Undersea measurements show that a "bench" has formed a buttress and that this buttress may tend to reduce the likelihood of future catastrophic detachment.[20][21]

On 2 April 1868, an earthquake with a magnitude estimated between 7.25 and 7.9 on the Richter scale rocked the southeast coast of Hawaii. This was the most destructive earthquake in the recorded history of Hawaii.[22] It triggered a landslide on Mauna Loa, 5 miles (8 km) north of Pahala, killing 31 people. A tsunami claimed 46 more lives. The villages of Punaluʻu, Nīnole, Kawaa, Honuapo, and Keauhou Landing were severely damaged. The tsunami reportedly rolled over the tops of the coconut trees up to 60 feet (18 m) high, and it reached inland a distance of a quarter of a mile (400 meters) in some places.[23]

The island suffered tsunami damage from earthquakes in Alaska on 1 April 1946, and in Chile on 23 May 1960. Downtown Hilo was severely damaged by both tsunamis, with many lives lost. Just north of Hilo, Laupāhoehoe lost 16 schoolchildren and five teachers in the tsunami of 1946.[25]

In March 2011, a 9.0 magnitude earthquake off the east coast of Japan again created a tsunami that caused minor damage in Hawaii. The estimated damage to public buildings alone was about US$3 million.[26] In the Kona area this tsunami washed a house into Kealakekua Bay, destroyed a yacht club and tour boat offices in Keauhou Bay, caused extensive damage in Kailua Kona, flooded the ground floor of the King Kamehameha Hotel,[27] and permanently closed the Kona Village Resort.[28]

In early May 2018, hundreds of small earthquakes were detected on Kīlauea’s East rift zone, leading officials to issue evacuation warnings. On 3 May 2018, the volcano erupted in Puna after a 5.0 earthquake earlier in the day, causing evacuations of the Leilani Estates and Lanipuna Gardens subdivisions.[29][30] A seemingly related 5.3 magnitude quake and a subsequent 6.9 magnitude earthquake occurred on 4 May.[31][32]

Vog (volcanic fog) can envelop the island. The gas plumes of the Kīlauea Volcano create a blanket of vog which the dominant trade winds mostly deflect toward the Kona coast on the west side of the island of Hawaiʻi. Vog contains chemicals that can damage the environment and the health of plants, humans, and other animals. Most of the aerosols are acidic and of a size where they can remain in the lungs to damage them and impair function. Flu-like symptoms and general lethargy are reported, and are especially pronounced in people with respiratory conditions.[33][34][35][36]

Hawaii County encompasses the entire island of Hawaii. Executive authority is vested in the mayor of Hawaii County, who is elected for a four-year term. Since 2004, the election by the voters has been on a non-partisan basis. In 2008, Billy Kenoi was elected mayor, succeeding Harry Kim who had served a two-term limit.[42] Legislative authority is vested in a nine-member county council. Each member represents a geographical region of the island, which closely correlates to one of the nine tax map districts of Hawaiʻi County. Members of the county council are elected on a non-partisan basis to two-year terms, with elections occurring in November of even-numbered years.

Administrative districts were originally based on the traditional land divisions called Moku of ancient Hawaii. Some of the more heavily populated districts have since been split into North and South districts to make them more comparable on a population basis.[43]

The number following each district is the Tax Map Key (TMK) number, used to locate state property information. They are assigned in a counter-clockwise order, beginning on the eastern side of the island.[44]

County council districts do not directly match the property tax districts because of the variation in the population density of voters in urban areas to rural areas; Hilo and Kailua (Kailua-Kona) towns are densely populated areas, while other districts such as Kaʻū, Puna, Hāmakua, and North & South Kohala are more sparsely populated.[45]

Several government functions are administered at the county level that are at the state or municipal level in other states. For example, the county has its own office of liquor control.[46]

Sugarcane was the backbone of the island of Hawaiʻi's economy for more than a century. In the mid-20th century, sugarcane plantations began to downsize, and in 1996 the last plantation closed.

Most of the island's economy is based on tourism, centered primarily in resort areas on the western coast of the island in the North Kona and South Kohala districts. More recently, Hawaiʻi Island has become a focus for sustainable tourism.

Diversified agriculture is a growing sector of the economy. Major crops include macadamia nuts, papaya, flowers, tropical and temperate vegetables, and coffee beans. Only coffee grown in the Kona District of this island may be branded Kona coffee. The island's orchid agriculture is the largest in the state, and resulted in the unofficial nickname "The Orchid Isle". The island is home to one of the United States' largest cattle ranches: Parker Ranch, on 175,000 acres (708 km2) in Waimea. The island is also known for astronomy, with numerous telescopes operated on the summit of Mauna Kea, where atmospheric clarity is excellent and there is little light pollution.

NELHA (Natural Energy Laboratory of Hawaii Authority), a 675-acre (273.2 ha) state developed site, is a green economic development ocean science and technology park on the west side of the island. It provides resources and facilities for energy and ocean-related research, education, and commercial activities in an environmentally sound and culturally sensitive manner. Business tenants on this coastal site include microalgae farms, aquaculture, solar technology and marine biotech. Tenants have access to three sets of pipelines delivering deep-sea water from a depth of up to 3,000 feet (910 m), as well as pristine sea surface water and almost constant sunshine. A 2012 study by the University of Hawaii Economic Research Organization (UHERO) found the total economic impact of activities at NELHA was $87.7 million and created 583 jobs.[49]

According to the county's 2010 Comprehensive Annual Financial Report,[50] the top employers in the county are:

Three routes connect the two major towns, Hilo on the east coast and Kailua-Kona on the west coast of the island:[51]

There are presently three Hawaii Scenic Byways on the island of Hawaii:

Rental car offices are at the international airports. Taxi service is also available. Island-wide bus service is provided by the "Hele-On Bus".[52]

National parks, mountains and cities on the island 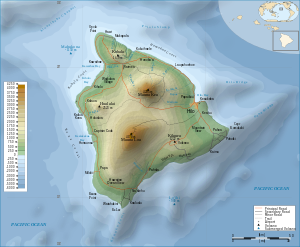 Topographic map of the island of Hawaii
[http://upload.wikimedia.org/wikipedia/commons/2/29/Hawaii_Island_topographic_map_SMIL.svg (interactive 3D model for Chrome or Firefox)

The island was traditionally divided into districts called moku. The names of the districts are (counter-clockwise, from the southeast): Puna, Hilo, Hāmākua, Kohala, Kona, and Kaʻū. The county government subdivides some of these to form elective districts of the county council. There are no incorporated municipalities on the island.