Heber Jeddy Grant was an American religious leader who served as an apostle and then as the seventh president of The Church of Jesus Christ of Latter-day Saints (LDS Church). Grant worked as a bookkeeper and a cashier. At age 23 he was called as president of the LDS Tooele Stake, then was called to be an LDS apostle on October 16, 1882, at age 25. After the death of Joseph Fielding Smith (1838-1918), Grant served as LDS church president until his death.

The first president born in Utah, Grant was also the last LDS Church president to have practiced plural marriage. He had three wives, though by the time he became church president in 1918 only his second wife, Augusta Winters, was still living.

In business, Grant helped develop the Avenues neighborhood of Salt Lake City. In 1884, he served a term as a representative to the Utah Territorial Legislature.

Grant was born in Salt Lake City, Utah Territory, the son of Rachel Ridgeway Ivins and Jedediah Morgan Grant. His father was a counselor in the First Presidency to Brigham Young (1801-1877). Rachel Grant was a native of New Jersey, where she had converted to the LDS Church at about age 20. Her cousin and later brother-in-law (he married her older sister Anna), Israel Ivins, was the first person baptized a Latter-day Saint in New Jersey.

Jedediah Grant died when Heber J. Grant was nine days old. After Jedediah's death, Rachel married Jedediah's brother, George Grant, but he fell into alcoholism, so she divorced him. Rachel became the dominant influence in Heber's life. She served for many years as president of the 13th Ward Relief Society in downtown Salt Lake City. 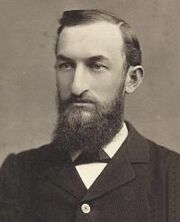