Familypedia
Register
Don't have an account?
Sign In
Advertisement
in: Van Leuven-Gaasbeek (surname), Born in 1245, Died in 1285,
and 4 more

Edit with form
watch 01:25
Jurassic World: Dominion Dominates Fandom Wikis - The Loop
Do you like this video?
Play Sound

Lord of Gaasbeek
Lord of Herstal
Lord of Baucignies

The Lordship of Gaasbeek arose out of the concern of the dukes of Brabant to create a domain on the west side of their duchy that was able to absorb possible attacks from the neighboring counties of Flanders and Hainaut. This happened in the first half of the 13th century and came down to the merging of a number of parishes that were formerly under the chapter of Nivelles and a number of villages where the duke of Brabant had lent the higher jurisdiction to the lord of Gaasbeek.

The Gaasbeek Castle is an medieval water castle. Godfrey of Leuven commissioned a castle here around 1240 to defend the Duchy of Brabant against the county of Hainaut. During the Ancien Régime this was the center of the Land van Gaasbeek. For more information see page Lordship of Gaasbeek.

Hendrik was like his father Lord of Gaesbeek, Herstal and Baucignies. He married Isabella van Beveren, daughter of Dirk (IV) van Beveren, Viscount of Dixmuiden and his wife Margaretha van Brienne. Hendrik died in the year 1285 and his wife in 1308. 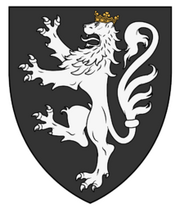