Familypedia
Register
Don't have an account?
Sign In
Advertisement
in: Benner (surname), Born in 1800, Died in 1880,
and 2 more

Henry was a younger brother of Elias Benner. Both served in Zion's Camp. Elias became one of the early martyrs of the Church a few years later, being killed by a murderous mob in the Haun's Mill Massacre.

The 1830's saw a great Protestant religious revival sweep across the United States that was called the "Second Great Awakening" and was characterized by much emotional preaching, spiritual and social reform movements and a surge in membership growth for a great many Christian denominations.

This period also saw the rise of a new Church of Christ that was organized in early 1830 by its young prophet-leader, Joseph Smith (1805-1844), and after 1838 was formally named The Church of Jesus Christ of Latter-day Saints. This church group was frequently called the "Mormon Church" or "Latter-day Saints" (LDS) for its belief in a new set of holy scriptures called "The Book of Mormon". For better or worse, this new religion generated a lot of attention in this region.

Missionaries of this church taught that it was not a reform movement or protest movement but a "restoration" of the original church with completeness of the full of doctrine of the gospel of Jesus Christ including the ministering of angels, the restored priesthood, lost scripture, revelations, prophecy, living apostles, the gifts of the spirit and much more. This message had profound impact on many who subsequently left all to follow the Prophet and the Church. In many cases their faith was so strong as to push these early converts to endure many difficult hardships and sacrifices and to eventually journey over a thousand miles westward to settle in the Great Salt Lake Valley. (See also New Religion (LDS 1830).)[1][2]

"In the company of Elias Benner on the march of Zion's Camp 11 May 1834 was Frederick Forney age 21, Philip Ettleman age 43, and Henry Benner age 34. Frederick Forney was almost certainly the first member of the Forney family to become a member of the LDS Church. George Forney of whom you reference at the time was only 14 years of age when his older brother Frederic departed on the march of Zion's Camp. (Most certainly all part of the Benner-Forney family group)

Created by the Mormon Prophet Joseph Smith (1805-1844) in early 1835, the Quorum of Seventy was to act as traveling and presiding ministers for the newly created The Church of Jesus Christ of Latter-day Saints. Many of these men performed notable works for the early church, living near then church headquarters in Kirtland, Ohio. The Quorum of Seventy itself did not meet as a governing body of the church and was not renewed until reorganized by the church in 1976.

We may assume that following Zion's Camp he returned to the Kirtland, Ohio area. Here in 1836 he receives a license to preach.

But even if so, he must have returned to Missouri, for we find Henry Benner among those who filed redress petitions seeking reimbursement from the government for the losses suffered during the Missouri persecutions. Henry Benner summed his losses at $550.00. 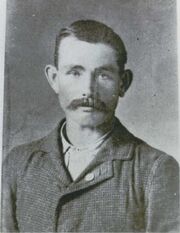