Familypedia
Register
Don't have an account?
Sign In
Advertisement
in: Plantagenet (surname), Born in 1367, Died in 1413,
and 19 more

He was known from birth as Earl of Derby. In 1397 he was created Duke of Hereford by King Richard II, and in 1399 he inherited his father's title of Duke of Lancaster. Later that year, he usurped the throne and became king as Henry IV. 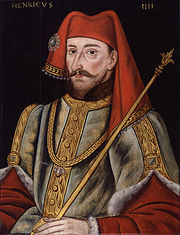