Familypedia
Register
Don't have an account?
Sign In
Advertisement
in: Plantagenet (surname), Born in 1281, Died in 1345,
and 5 more

Edit with form
watch 01:36
We're Getting Mutants in the MCU - The Loop
Do you like this video?
Play Sound
Main
tree
descendants
ancestors

Henry was given livery of Monmouth and the lands of his father beyond Severn in 1297. In 1297-8 he served in Flanders and during the wars with the Scottish. He fought in the Battle of Falkirk 22 July 1298. February 6, 1298/9, he was summoned to Parliament, at which time he became Lord Lancaster. He fought in the siege of Caerlaverock in July 1300. He was among those who signed the Baron's letter to Pope Boniface in 1301. In 1307 he received a pardon for aiding the escape of John le Harper from prison. In 1308, when King Edward II was crowned, he and his wife attended. In 1310 he went to France with the king's permission to claim the inheritance of lands which he had inherited on his brother John's death. Maud was still living 4 August 1320, but sshe died testate before December 3, 1322. She was interred at Montisfont Priory, which she had been a patron of.

After Maud's death, Henry joined the confederacy of the Marchers aginst the Despensers in 1320. In 1324 he was given his brother Thomas' Earldom of Leicester. Although he had petitioned the king for it and the Earldom of Lancaster, he was not granted Lancaster until later. The Queen returned to England with Roger de Mortimer to lead insurrection against the king and the failure of the king to grant him his inhertance of Lancastermay have contributed to his decision to join the Queen's cause. Revenge for his brother's execution was another likely cause. He must have had a considerable political influence, because after he went over to her side, there weads a general defection to her side by the other nobles. He was Earl of Lancaster in 1326, when he attending a meeting to appoint Prince Edward keeper of the realm during his fathers, absence. Since the king was absent due to fleeing to Wales, it is presumable that the Queen was the one who granted him the title of Earl of Lancaster. Henry captured the King at Neath and took him to Llantrisan in Glamorgan, Wales November 16, 1326. He was appointed to take the King to Kenilworth and be responsible for him until April 4, 1327. Edward II was coronated February 1 1326.7. In 1328 Henry refused to attend the Parliament which had been called. He quarrelled with the Queen and she then took troops to his lands in Leicester and lay waste to them. Henry tried to fight the Queen's and Mortimer's troops, but was forced to submit to them, and his lands were returned to him. Along with the Bishop of Norwich, he negotiated with King Philippe of France. In April 1330 he and his wife founded a hospital for poor persons and pilgrims in Leicester. Eventually Mortimer fell and Henry was able to resume his close friendship with the young King. King Edward granted him 50 marks yearly for the maintenance of his estate. When Edward III invaded Scotland in 1335, Henry was withnhim. July 1345 Prince Lionel was Keeper of England, in his father's absence and Henry was appointed to his Council. Family

Sir Henry of Lancsdter, Earl of Lancaster and leicester, Lord of Monmouth, died testate 22 Sept. 1345, and was buried with great state on the north side of the high altar of Newark Abbey, Leicester. According to John Burke, his widow, Maud married Hugh Le Despenser. I can't find which Le Despenser this might have been. Hugh the Older and Younger were both captured and executed by Queen Isabella in 1326. I believe he had her mixed up with her mother, Isabelle De Beauchamp, who married Hugh Le Despenser after Maud's father died. This would have made her the half sister of Hugh the Younger, and marriage to him would have been highly unlikely. 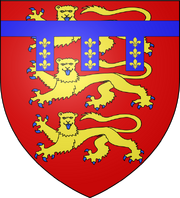