A general and heraldic dictionary of the peerages of England, Ireland, and Scotland, extinct, dormant, and in abeyance. England by John Burke

"Henry de Grey, who being in the king's army in Wales, in the 10th, Edward I., had scutage from all his tenants, in the counties of Norfolk, Suffolk, Kent, Nottingham and Derby, that held of him by military service, and had summons, in the 22d of the same monarch, amongst other great men, to repair forthwith to the king, to consult about the urgent affairs of the realm, as also to be at Portsmouth, upon the first of the ensuing September, with horse and arms, to attend the king in his expedition into Gascony. After which he had summons to parliament as a baron, from 6th February, 1299, to 6th August, 1308. His lordship was for several years, actively engaged in the French and Scottish wars; in the latter of which he formed one of the immediate retinue of Prince Edward. He d. in 1308, and was s. by his eldest son." 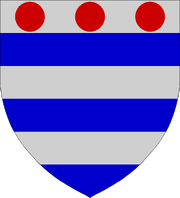