Familypedia
Register
Don't have an account?
Sign In
Advertisement
in: Hesse, States of Germany, NUTS 1 statistical regions of the European Union, Chatti

/ˈhɛs/) or Hessia (German: Hessen [ˈhɛsən], Hessisch: Hesse [ˈhɛzə]) is both a cultural region of Germany and the name of an individual German state.

The state is called Hessen in German and Hesse (or Hessia) in English; the English name for the state was taken from French. "Hessia" is a variant and is related with "Hassia", which is the common and nearly similar medieval latin term for the area. An inhabitant of the state is a Hesse (masculine) or Hessin (feminine) in German and a Hessian in English (see Hessian (soldiers)). Occasionally the German term Hessen is also used in English, for example by the European Commission.[3] Hesse refers to the Germanic tribe of the Chatti, who settled in the region in the first centuries B.C.

See also: Rulers of Hesse and House of Hesse

An early Celtic presence in what is now Hesse is indicated by a mid 5th century BC La Tène style burial uncovered at Glauberg. The region was later settled by the Germanic Chatti tribe in ca. the 1st century BC, and the name Hesse is a continuation of that tribal name. In the early Middle Ages, a Frankish gau comprising an area around Fritzlar and Kassel and a Saxon one further north were known as Hessengau. In the 9th century the Saxon Hessengau also came under the rule of the Franconians. In the 12th century it was passed to Thuringia.

In the War of the Thuringian Succession (1247–64), Hesse gained its independence and became a Landgraviate within the Holy Roman Empire. It shortly rose to primary importance under Landgrave Philip the Magnanimous, who was one of the leaders of German Protestantism. After Philip's death in 1567, the territory was divided up among his four sons from his first marriage (Philip was a bigamist) into four lines: Hesse-Kassel (or Hesse-Cassel), Hesse-Darmstadt, Hesse-Rheinfels and the also previously existing Hesse-Marburg. As the latter two lines died out quite soon (1583 and 1605, respectively), Hesse-Kassel and Hesse-Darmstadt were the two core states within the Hessian lands. Several collateral lines split off during the centuries, such as in 1622, when Hesse-Homburg split off from Hesse-Darmstadt. In the late 16th century, Kassel adopted Calvinism, while Darmstadt remained Lutheran and subsequently the two lines often found themselves on different sides of a conflict, most notably in the disputes over Hesse-Marburg and in the Thirty Years' War, when Darmstadt fought on the side of the Emperor, while Kassel sided with Sweden and France.

The Landgrave Frederick II (1720–1785) ruled as a benevolent despot, 1760-1785. He combined Enlightenment ideas with Christian values, cameralist plans for central control of the economy, and a militaristic approach toward diplomacy.[4] He funded the depleted treasury of the poor nation by renting out 19,000 soldiers in complete military formations to Great Britain to fight in North America during the American Revolutionary War, 1776-1783. These soldiers, commonly known as Hessians, fought under the British flag. For further revenue the soldiers were rented out elsewhere as well. Most were conscripted, with their pay going to the Landgrave.

Hesse-Kassel was elevated to the rank of an Electorate in 1803, but this remained without effect as the Holy Roman Empire was disbanded in 1806. The territory was annexed by the Kingdom of Westphalia in 1806, but restored to the Elector in 1813. While other Electors had gained other titles, becoming either Kings or Grand-dukes, the Elector of Hesse-Kassel alone retained the anachronistic dignity. The name survived in the term Kurhessen, denoting the region around Kassel. In 1866 it was annexed by Prussia, together with the Free City of Frankfurt, Hesse-Homburg and the duchy of Nassau, which established the province of Hesse-Nassau.

Hesse-Darmstadt was elevated to the rank of a Grand Duchy in 1806. In the War of 1866, it fought on the side of Austria against Prussia, but retained its autonomy in defeat, because a greater part of the country was situated south of the Main river and Prussia did not dare to expand beyond the Main line as this might have provoked France. But the parts of Hesse-Darmstadt north of the Main river (the region around the town of Gießen, commonly called Oberhessen) were incorporated in the Norddeutscher Bund, a tight federation of German states, established by Prussia in 1867. In 1871 the rest of the Grand Duchy joined the German Empire. Around the turn of the century, Darmstadt was one of the centres of the Jugendstil. Until 1907, the Grand Duchy of Hesse used only the Hessian red and white lion as its coat-of-arms

The revolution of 1918 transformed Hesse-Darmstadt from a monarchy to a republic, which officially renamed itself to "Volksstaat Hessen" (People's State of Hesse). The parts of Hesse-Darmstadt on the western banks of the Rhine (province Rheinhessen) were occupied by French troops until 1930 under the terms of the Versailles peace treaty that officially ended WWI in 1919.

After World War II the Hessian territory left of the Rhine was again occupied by France, whereas the rest of the country was part of the US occupation zone. The French separated their part of Hesse from the rest of the country and incorporated it into the newly founded state of Rhineland-Palatinate (Rheinland-Pfalz). The United States, on the other side, proclaimed the state of Greater Hesse (Groß-Hessen) on 19 September 1945, out of Hesse-Darmstadt and most of the former Prussian province of Hesse-Nassau. On December 4, 1946 Groß-Hessen was officially renamed Hessen.[5]

The principal cities of Hessen include Frankfurt am Main, Wiesbaden, Darmstadt, Offenbach, Hanau, Gießen, Wetzlar, and Limburg in the greater Rhine Main Area, Fulda in the east, and Kassel and Marburg an der Lahn in the north.

The most important rivers in Hesse are the Fulda and Eder rivers in the north, the Lahn in the central part of Hesse, and the Main and Rhine in the south. The countryside is hilly and there are numerous mountain ranges, including the Rhön, the Westerwald, the Taunus, the Vogelsberg, the Knüll and the Spessart.

Most of the population of Hesse is in the southern part of Hesse in the Rhine Main Area. The Rhine borders Hesse on the southwest without running through the state, only one old arm – the so-called Alt-Rhein – runs through Hesse. The mountain range between the Main and the Neckar river is called the Odenwald. The plain in between the rivers Main, Rhine and Neckar, and the Odenwald mountains is called the Ried.

Hesse is the greenest state in Germany.[6] Forest covers 42% of the state.[6]

Administration of the State of Hessen[] 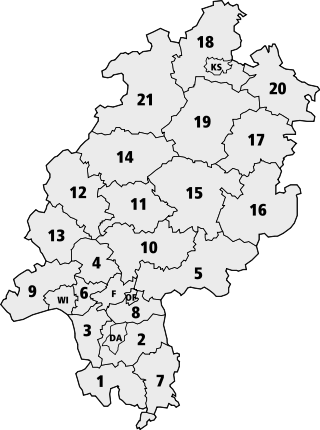 Hesse is divided into 21 districts and 5 independent cities (with their abbreviations, as used on vehicle number plates):

Rhenish Hesse (German: Rheinhessen) refers to the part of the former Grand Duchy of Hesse-Darmstadt located west of the Rhine river and now part of Rhineland-Palatinate. It is a hilly countryside largely devoted to vineyards; therefore, it is also called the "land of the thousand hills." Its larger towns include Mainz, Worms, Bingen, Alzey, Nieder-Olm and Ingelheim. Many inhabitants commute to work in Mainz, Wiesbaden, or Frankfurt.

Rhenish Hesse contains a number of municipalities and has no specific overall government. It was previously part of the government area of Rheinhessen-Pfalz. However, the state of Rheinland-Palatinate no longer uses this area for administrative purposes.

The Politics of Hesse takes place within a framework of a federal parliamentary representative democratic republic, where the Federal Government of Germany exercises sovereign rights with certain powers reserved to the states of Germany including Hesse. The state has a multi-party system where the two main parties were long the center-right Christian Democratic Union (CDU) and the leftist Social Democratic Party of Germany (SPD). However, this changed in 2009, when support for the SPD collapsed after a political crisis in 2008. There are now five parties in the Hesse Landtag.

Although the government under Minister-President, Roland Koch (CDU), lost their majority in the state diet Landtag of Hesse following the 2008 Landtag election, their rival parties were unable to form a government. A snap election was held in 2009, which enabled the CDU again to form a government with the FDP. In May 2010, Koch announced his abdication from the post of Minister-President as well as his abandonment of politics. His successor is Volker Bouffier.

The party strengths in the 2009 election were as follows: Template:Hesse state election, 2009

The cultural region of Hesse extends into Rhenish Hesse which is in Rhineland-Palatinate. The oldest and second largest Hessian city of Mainz is in Rhenish Hesse. The locals speak a Rhine Franconian dialect known as Hessisch.

The official anthem of Hesse is called "Hessenlied" (Song of Hesse), and was written by Albrecht Brede (music) and Carl Preser (lyrics).

Hessischer Rundfunk (HR) is the main ARD broadcaster in Hesse, providing a statewide TV programme as well as its regional radio stations (HR 1, HR 2, HR 3, HR 4, you fm and HR info). Other than HR, ZDF and other privately run TV stations flourish. Among the commercial radio stations that are active in Hesse are Hit Radio FFH, Planet Radio, Harmony FM, Radio BOB and Main FM.

Hesse is one of the largest and healthiest economies in Germany. Its GDP in 2009 exceeded 217 billion Euros (about 300 bn US$).[7] This makes Hesse itself one of the largest economies in Europe and the 31st largest in the world.[8] Some large companies headquarted in Hesse include Opel, Merck, Deutsche Bank, Commerzbank, Fraport, Fresenius, Sanofi Aventis, Procter & Gamble, B. Braun and Deutsche Börse. After figures among the GDP per capita, Hesse is the wealthiest State in Germany.

Hesse has one of the best transportation networks in Europe. Many trans-European and German motorways, high-speed train, and waterways lines cross Hesse. Frankfurt International Airport is Germany's largest and Europe's third largest airport (after London Heathrow and Paris Charles de Gaulle). Frankfurt (Main) Hauptbahnhof is Germany's second busiest railway station by passengers but the busiest in terms of traffic.

Hesse has a dense highway network with a total of 24 motorways. The internationally important motorway routes through Hesse are the A3, A5, and A7. Close to the airport of Frankfurt is the Frankfurter Kreuz, Germany's busiest and one of Europe's busiest motorway junction, where the motorways A3 (Arnhem-Cologne-Frankfurt-Nuremberg-Passau) and A5 (Hattenbach-Frankfurt-Karlsruhe-Basel) intersect. The A5 becomes as large as 4 lanes in each direction near the city of Frankfurt am Main. During the rush-hour its possible to use the emergency lanes on the A3 and A5 motorway in the Rhine-Main Region. In fact of this, the Motorways had 4 lanes in each direction.

The Hessian constitution was written in 1946, three years before the Grundgesetz (1949), so some older laws like death penalty have been kept until today.

Article 21 of the Hessian constitution[]

Article 102 of the Grundgesetz[]