Familypedia
Register
Don't have an account?
Sign In
Advertisement
in: Rodham (surname), Born in 1947, People on Wikipedia,
and 64 more

Former United States First Lady as the wife of Bill Clinton. Later Secretary of State during the first term of Barack Obama (1961) from 2009-2013; she had run a vigorous campaign to be the Democrat candidate herself. In 2015 she began campaigning again and weas successful in becoming the candidate but was defeated at the November 2016 election by Republican Donald Trump.

See Hillary's automatically updated tree subpage and her manually constructed ahnentafel subpage. It appears that she and Republican rival Donald John Trump (1946) are 19th cousins, having common ancestry in John of Gaunt, 1st Duke of Lancaster (1340-1399) and his mistress, later his wife, who used her first married name, Katherine Swynford, before marrying John.

The WARGS website shows that Hillary is a distant cousin to numerous well-known people, including: 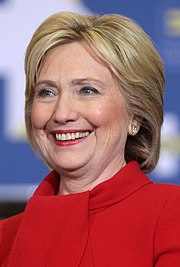