Hillsborough County was created on January 25, 1834, from Alachua and Monroe Counties,[6] during the U.S. territorial period (1822–1845). The new county was named for Wills Hill, the Earl of Hillsborough, who served as British Secretary of State for the Colonies from 1768 to 1772.[7] The County was created through efforts by Augustus Steele.[8]

The last significant change in Hillsborough County's borders was the separation of its western section to create Pinellas County in 1911.

On New Year's Day in 1914, the St. Petersburg-Tampa Airboat Line initiated the first scheduled commercial airline service in the world, from St. Petersburg to Tampa.[10]

The county's unincorporated area is around 888 square miles (2,300 km2), more than 84% of the total land area. Municipalities account for 163 square miles (420 km2). The modern boundaries of the county place it midway along the west coast of Florida.

Hillsborough is home to Alafia River State Park and Hillsborough River state parks, and to the C. W. Bill Young Regional Reservoir and Lithia Springs, one of the largest natural springs in Florida.

On the Alafia River near Lithia Springs Park

An alligator in the Alafia River State Park

Hurrah Lake on the Alafia River 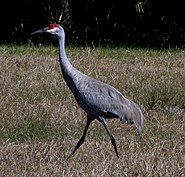 On the Hillsborough River near Lettuce Lake Park

In 2010, 6.0% of the Hillsborough's population considered themselves to be of only "American" ancestry (regardless of race or ethnicity.)[16]

Hillsborough County tends to lean Democratic, having not been won by a Republican presidential candidate since the 2004 election. For the last quarter-century, it has been a powerful swing county in one of the nation's most important swing states. It is part of the politically important I-4 Corridor between Tampa Bay and Orlando, an area that historically decides most elections in Florida. Hillsborough was considered a bellwether county, voting for the statewide winner in every presidential election from 1964-2012. It has also voted for the winner of the presidency in every election since 1928 except twice, voting for the loser only in 1992 and 2016. The southern portion of the county, around Tampa, is powerfully Democratic, while the northern and eastern portions are heavily Republican.

On the statewide level, the county also tends to lean Democratic with Democrats Bill Nelson for senator and Andrew Gillum for governor both winning the county in the 2018 elections. However, Republican senator Marco Rubio did win the county in his 2010 and 2016 senatorial campaigns.

In 2008, Barack Obama won the county by seven points, the first Democrat to capture the county since Bill Clinton's re-election victory in 1996.[26] Obama won Hillsborough again in 2012 over Republican presidential nominee Mitt Romney by roughly the same margin.

In 2016, Donald Trump became the first Republican since Calvin Coolidge in 1924 to win the election without carrying the county.

A home rule charter for Hillsborough County was approved by voters in a county-wide referendum held in September 1983, and the first county commissioners elected under this new charter took office on May 28, 1985.

The charter divides the power of county government between legislative and executive branches. The Board of County Commissioners, which composes the legislative branch, sets overall policy by means of ordinances, resolutions, and motions.

The executive powers of county government are vested in the county administrator, appointed by county commissioners and charged by the charter to faithfully implement the powers of the board. The charter provides for a county attorney, to be hired by the county administrator with the advice and consent of the county commissioners. The charter contains a provision for a charter review board appointed by County Commissioners every five years to conduct a study of county government and propose amendments to the charter. These amendments must be presented to voters for approval. One amendment was approved in November 2002, adding the position of County Internal Performance Auditor to the government structure. This position reports directly to the County Commission.

The current administrator is Bonnie M. Wise, who took office on July 1, 2020, replacing Mike Merrill, who had served as administrator since 2010.[28] Wise previously served as the county's deputy administrator and Tampa's chief financial officer.[29]

Of the seven members of the Board of County Commissioners for Hillsborough County, four are elected from single-member districts, and three are elected county-wide. The board approves the county's operating and capital budgets and the county's capital-improvement program. It may take action on any programs for the improvement of the county and the welfare of its residents.

These five countywide elected positions have specific responsibilities under the county charter:

Under a charter ordinance that went into effect May 1985, county commissioners are directed to perform legislative functions of government by developing policy for the management of Hillsborough County. The county administrator, a professional appointed by the board, and the administrative staff are responsible for the implementation of these policies.

Hillsborough County's discretionary sales tax rate increased from 1% to 2.5% in January 2019. When combined with the state of Florida's 6%, the rate is 8.5%, the highest in Florida. The rate includes two surcharges approved by voter referendum in November 2018, 1% for transportation and 1/2% for schools.[30] It is only collected on the first $5000 of any large purchase.

In the early 20th century, Hillsborough's economy was predominantly based on cigar-making and agriculture. In 2012, Hillsborough had the second-largest agricultural output among Florida's counties. As of 2010, the average annual employment in Hillsborough County was 563,292. The percentages of total employment by industry were:

In 2011, sales of all agricultural commodities produced in Hillsborough County were over $832,410,300. The largest crop by value was strawberries at over $388 million.[33] Values of various crops included:

This is an incomplete list, which may never be able to satisfy certain standards for completeness.
Revisions and sourced additions are welcome.

These libraries are part of the Hillsborough County Public Library Cooperative:[39]

Hillsborough County Fire Rescue serves the unincorporated areas of Hillsborough County. Fire service began in the 1950s as an all-volunteer force consisting of about a dozen loosely associated community-based organizations. The first full-time career firefighters were hired in 1973. The department now has 1,019 career uniformed and support personnel who continue to set the pace in fire and emergency medical response, making it the fourth-largest department in the state. Since the 1997 consolidation of Hillsborough County Fire Rescue and Emergency Medical Services (EMS), the department has placed paramedics on each career, front-line apparatus. The department operates 35 ALS transport ambulances, 45 Engine Companies, 5 Truck Companies, 2 Heavy Rescue's, 1 Hazardous Incident Unit, 1 Fire Boat and 1 Rescue Boat. These units operate out of 44 Fire Rescue stations located strategically throughout Hillsborough County. As of summer 2021, 2 additional stations are being constructed to bring that number up to 46. As nearly 85% of the department's more than 113,000 [41] emergency responses require some level of medical care, having paramedics assigned to each unit assures that the citizens of Hillsborough County are receiving rapid advanced life-support care.

Hillsborough County Fire Rescue and the Board of County Commissioners have implemented a plan to continue placing new fire rescue stations in areas where growth is occurring or gaps in coverage may exist. Fire Chief Dennis Jones leads a senior staff of two deputy chiefs (operations and administrative branches), the fire marshal, and the emergency manager. All fiscal functions, facilities maintenance and supply, apparatus/equipment procurement, emergency dispatch manager, personnel chief, and training chief are under the direction of the deputy chief of administration. The three Shift Commanders, as well as the Rescue Chief and the Special Operations Chief, report directly to the Deputy Chief of Operations. The Operations Chief is responsible for the overall response readiness of all front line personnel. The Emergency Manager oversees all Office of Emergency Management (OEM) planning and operations of the EOC.[42]

The Office of Emergency Management is a division of Hillsborough County Fire Rescue that is directly responsible for planning and coordinating the evacuation and sheltering of all county residents in the event of a natural or manmade disaster. This agency is also responsible for planning, orchestrating and coordinating response actions and continuity of government in the aftermath of a major disaster. Preston Cook has been the Emergency Manager since 2011.

The Hurricane Evacuation Assessment Tool has been created to assist residents of Hillsborough County by providing evacuation and sheltering information in the event of a hurricane or other natural disaster. This interactive program was designed to assist the public in easily determining if they are in one of the five evacuation zones. It also provides information on shelters, hospitals, fire stations, and sandbag locations.

The Office of Emergency Management also provides information to the public on: Hurricane information, procedures for hazardous-materials spills, and flooding, tornado, wildfire, and terrorism preparedness.

Only three cities are incorporated in Hillsborough County:

Despite its large population, most of the area of the county is unincorporated and falls under the jurisdiction of the Hillsborough County board of commissioners.[44]