In the history of Colorado, the first inhabitants of what was to become the State of Colorado were the American Indians. The earliest explorers of European extraction to visit the area were Spanish explorers. During the period 1832 to 1856 a number of traders, trappers, and settlers including the French and the Americans established trading posts and small settlements along the Arkansas River, and on the South Platte near the Front Range. Prominent trading posts were Bent's Fort and Fort Pueblo on the Arkansas and Fort St. Vrain on the South Platte. The organization of the Colorado Territory included land from the western portion of Kansas, the eastern portion of Utah Territory, the southwestern portion of Nebraska Territory, and a small portion of northeastern New Mexico Territory on February 28, 1861. [1] 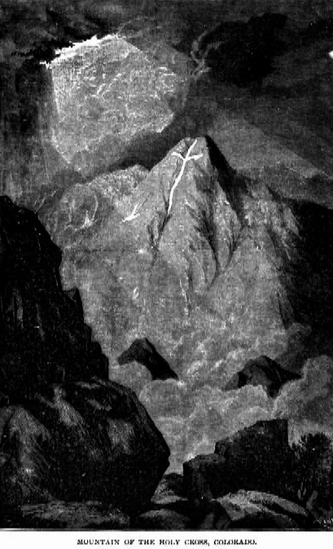 The Territory of Colorado was a historic, organized territory of the United States that existed between 1861 and 1876. Its boundaries were identical to the current State of Colorado. The territory ceased to exist when Colorado was admitted to the Union as a state on August 1, 1876. The territory was organized in the wake of the 1859 Pike's Peak Gold Rush, which had brought the first large concentration of white settlement to the region. The organic act[1] creating the territory was passed by Congress and signed by President James Buchanan on February 28, 1861, during the secessions by Southern states that precipitated the American Civil War. The organization of the territory helped solidify Union control over a mineral rich area of the Rocky Mountains. Statehood was regarded as fairly imminent, but territorial ambitions for statehood were thwarted at the end of 1865 by a veto by President Andrew Johnson. Statehood for the territory was a recurring issue during the Ulysses Grant administration, with Grant advocating statehood against a less willing Congress during Reconstruction.

President Ulysses Grant declared Colorado a state on August 1, 1876. One century after the birth of the nation, Colorado became known as the "Centennial State." The borders of the new state coincided with the borders established for the Colorado Territory. Women won the right to vote in Colorado in 1893. Colorado was the first state in the union to grant this right to women through a popular election. (Wyoming approved the right of women to vote in 1869 through a vote of the territorial legislature.) Governor Davis H. Waite campaigned for the Constitutional amendment granting women the right to vote in Colorado. Governor Waite is also noted as one of the few elected officials ever to call out the national guard to protect miners from a force raised by mine owners. Governor Waite belonged to the Populist Party.

Participants in the Pike's Peak Gold Rush from 1858 to 1861 were called Fifty-Niners, and many of the new arrivals settled in the Denver area. Gold in paying quantities was also discovered in the Central City area, and by 1860 the population of Central City was 60,000. In 1879, silver was discovered in Leadville, resulting in the Colorado Silver Boom.

Many early mining efforts were cooperative ventures. However, as easy-to-reach surface deposits played out, miners increasingly turned to hard rock mining. Such industrial operations required greater capital, and the economic concept of mineral rights resulted in periodic conflicts between the mine owners, and the miners who increasingly sold their labor to work in the mines.

As the mines were dug deeper, they became more dangerous, and the work more arduous. In the 1890s many Colorado miners began to form unions in order to protect themselves. The mine operators often formed mine owners' associations in response, setting up the conditions for a conflict. Notable labor disputes between hard rock miners and the mine operators included the Cripple Creek strike of 1894 and the Colorado Labor Wars of 1903-05.

Coal mining in Colorado began soon after the first settlers arrived! Although the discovery of coal did not cause boom cycles as did the precious metals, the early coal mining industry also established the conditions for violent confrontations between miners and mine owners. The usual issues were wages, hours, and working conditions. Early coal mining in Colorado was extremely dangerous, and the state had one of the highest death rates in the nation. Coal miners also resented having to pay for safety work such as timbering the mines, and they were sometimes paid in scrip that had value only in the company store.

Like all resource extraction, mining is a boom or bust industry, and over the years many small towns were established, then abandoned when the ore ran out, the market collapsed, or another resource became available. There were once more than a hundred coal mines in the area north of Denver and east of Boulder. They began to close when natural gas lines arrived. Coal and precious metals are still mined in Colorado, but the mining industries have changed dramatically in recent decades.

In 1972, Colorado became the only state to reject the award as the site of the Olympic Games after they had been granted. The International Olympic Committee relocated the 1976 Winter Olympics to Innsbruck, Austria after Colorado voters rejected a bond issue to raise money for expenses related to hosting the event. No venue had rejected the award before nor has any venue since.