Familypedia
Register
Don't have an account?
Sign In
Advertisement
in: Nelson (surname), Born in 1758, Died in 1805,
and 21 more

Horatio Nelson, 1st Viscount Nelson, 1st Duke of Bronté, KB (29 September 1758 – 21 October 1805) was an English flag officer famous for his service in the Royal Navy, particularly during the Napoleonic Wars. He won several victories, including the Battle of Trafalgar in 1805, during which he was killed. 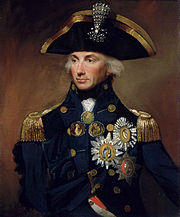