The House of Hohenzollern is a noble family and royal dynasty of electors, kings, and emperors of Brandenburg, Prussia, Germany, and Romania. It originated in the area around the town of Hechingen in Swabia during the 11th century. They took their name from their ancestral home, the Burg Hohenzollern castle near Hechingen.

The family uses the motto Nihil Sine Deo (English: Nothing Without God). The family coat of arms, first adopted in 1192, began as a simple shield quarterly sable and argent. A century later, in 1317, Frederick IV, Burgrave of Nuremberg, added the head and shoulders of a hound as a crest.[1] Later quartering reflected heiresses’ marriages into the family.

The family split into two branches, the Catholic Swabian branch and the Protestant Franconian branch, known also as the Kirschner line.[2] The Swabian branch ruled the area of Hechingen until the revolution of 1848/49. The Franconian branch was more successful: members of the Franconian branch became Margrave of Brandenburg in 1415 and Duke of Prussia in 1525. Following the union of these two Franconian lines in 1618, the Kingdom of Prussia was created in 1701, eventually leading to the unification of Germany and the creation of the German Empire in 1871, with the Hohenzollerns as hereditary emperors and kings of Prussia.

Germany's defeat in World War I led to the German Revolution. The Hohenzollerns were overthrown and the Weimar Republic was established, thus bringing an end to the modern German monarchy.

One of the most prominent ruling houses in the history of Europe, the Hohenzollern Dynasty played a major role in the history of Germany from the late Middle Ages until the end of World War I. It takes its name from a castle in Swabia first mentioned as Zolorin or Zolre (the modern Hohenzollern, south of Tübingen, in the Land Baden-Württemberg).

The oldest known mention of the Zollern was in 1061 by Berthold of Reichenau. It was a county, ruled by the counts of Zollern, whose descent has been attempted to be linked (without success) to the Burchardinger dynasty.[4]

Count Frederick III of Zollern was a loyal retainer of the Holy Roman Emperors Frederick Barbarossa and Henry VI, and around 1185 he married Sophia of Raabs, the daughter of Conrad II, Burgrave of Nuremberg.

After the death of Conrad II, often referred to as Kurt II who left no male heirs, Frederick III was granted the burgraviate of Nuremberg in 1192 as Burgrave Frederick I of Nuremberg-Zollern. Since then the family name has been Hohenzollern.

After Frederick's death, his sons partitioned the family lands between themselves:

The cadet Franconian branch of the House of Hohenzollern was founded by Conrad I, Burgrave of Nuremberg (1186-1261).

Beginning in the 16th century, this branch of the family became Protestant and decided on expansion through marriage and the purchase of surrounding lands.

The family supported the Hohenstaufen and Habsburg rulers of the Holy Roman Empire during the 12th to 15th centuries, and they were rewarded with several territorial grants.

In the first phase, the family gradually added to their lands, at first with many small acquisitions in the Franconian and Bavarian regions of Germany:

In the second phase, the family expanded their lands further with large acquisitions in the Brandenburg and Prussian regions of Germany and current Poland:

These acquisitions eventually transformed the Hohenzollerns from a minor German princely family into one of the most important in Europe.

At Frederick V's death on 21 January 1398, his lands were partitioned between his two sons:

On 2 December 1791, Christian II Frederick sold the sovereignty of his principalities to king Frederick William II of Prussia.

On 2 December 1791, Christian II Frederick sold the sovereignty of his principalities to king Frederick William II of Prussia. 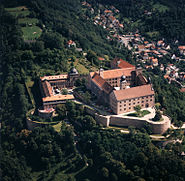 The New Castle at Bayreuth

The Duchy of Jägerndorf (Krnov) was purchased in 1523.

The duchy of Jägerndorf was confiscated by Ferdinand III of the Holy Roman Empire in 1622.

The short-lived Margraviate of Brandenburg-Küstrin was set up, against the Hohenzollern house laws on succession, as a secundogeniture fief of the House of Hohenzollern, a typical German institution.

In 1788 the title was incorporated into the Kingdom of Prussia.

In 1525 the Duchy of Prussia was established as a fief of the King of Poland.

In 1772 the Duchy of Prussia was elevated to a kingdom.

In 1871 the Kingdom of Prussia was a constituting member of the German Empire.

In 1871 the German Empire was proclaimed. With the accession of Wilhelm I to the newly established imperial German throne, the titles of King of Prussia, Duke of Prussia and Elector of Brandenburg were always attached to the title of German Emperor.

In 1918 the German empire was abolished and replaced by the Weimar Republic.

After the outbreak of the German Revolution in 1918, both Emperor Wilhelm II and the Crown Prince Wilhelm signed the document of abdication, with effect only for their own person. Despite the abolition of the German monarchy in 1918, the House of Hohenzollern never relinquished its claims to the thrones of Prussia and the German Empire. These claims are linked by the Constitution of the second German Empire: according to this, whoever was King of Prussia was also German Emperor. However, these claims are not recognised by the Federal Republic of Germany and the German Constitution of 1949 guarantees democracy and republicanism.

In June 1926, a referendum on expropriating the formerly ruling princes of Germany without compensation failed and as a consequence, the financial situation of the Hohenzollern family improved considerably. A settlement between the state and the family made Cecilienhof property of the state but granted a right of residence to Crown Prince Wilhelm and his wife Cecilie. The family also kept the ownership of Monbijou Palace in Berlin, Oels Castle in Silesia, Rheinsberg Palace, Schwedt Palace and other property until 1945. The communist government of the Soviet occupation zone depropriated all landowners and industrialists, by which the House of Hohenzollern lost almost all of its fortune, leaving them only with a few company shares and Hohenzollern Castle in West Germany. The Polish government depropriated the Silesian property and the Dutch government seized Huis Doorn, the Emperor's exile seat. After the German reunification however, the family was legally able to claim their movable property back, namely art collections and parts of the interior of their former palaces. Negotiations on a return or compensation for these assets are not yet finished.

Main article: Line of succession to the German throne

The head of the house is the titular King of Prussia and German Emperor. He also bears a historical claim to the title of prince of Orange. Members of this line style themselves princes of Prussia.

Palaces of the Prussian Hohenzollern[]

Some important castles and palaces of the Prussian Hohenzollern were:

The Royal Palace in Berlin 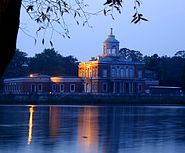 Stolzenfels Castle on the Rhine

The senior Swabian[6] branch of the House of Hohenzollern was founded by Frederick II, Burgrave of Nuremberg.

They never expanded from these three Swabian principalities, which was one of the reasons they became relatively unimportant in German history for much of their existence. However, they kept royal lineage and married members of the great royal European houses.

The last ruling Prince of Hohenzollern-Sigmaringen, Karl Anton, would later serve as Minister-President of Prussia between 1858 and 1862.

The Hohenzollern-Hechingen finally became extinct in 1869. A descendent of this branch was Sophie Chotek, wife of Archduke Francis Ferdinand of Austria-Este.

However, a member of the Hohenzollern-Sigmaringen family, Charles Eitel, second son of prince Karl Anton, was chosen to become prince of Romania as Charles I in 1866. In 1881 Charles I became the first king of the Romanians.

Charles' older brother, Leopold, was offered the Spanish throne after a revolt removed queen Isabella II in 1870. Although encouraged by Bismarck to accept it, Leopold backed down once France's Emperor, Napoleon III, stated his objection. Despite this, France still declared war, beginning the Franco-Prussian war.

Charles I had only a daughter who died very young, so Leopold's younger son Ferdinand I would succeed his uncle as king of the Romanians in 1914, and his descendants continued to rule in Romania until the end of the monarchy in 1947.

In modern times this branch has been represented only by the last king, Michael I of Romania, and his daughters. The descendants of Leopold's oldest son William continue to use the titles of prince or princess of Hohenzollern.

King Michael renounced his connection in 2011.[7]

Between 1630 and 1681 the county was temporarily integrated into the principality of Hohenzollern-Sigmaringen.

The County of Hohenzollern-Hechingen was established in 1576 with allodial rights.

In 1850 the principality was sold to the Franconian branch of the family and incorporated into the Kingdom of Prussia. The branch became extinct in dynastic line with Konstantin's death in 1869.

The County of Hohenzollern-Sigmaringen was established in 1576 with allodial rights and a seat at Sigmaringen Castle.

Kings of the Romanians[]

The Principality of Romania was established in 1862, after the Ottoman vassal states of Wallachia and Moldavia had been united in 1859 under Alexandru Ioan Cuza as Prince of Romania in a personal union.

He was deposed in 1866 by the Romanian parliament which then invited a German prince of the Hohenzollern-Sigmaringen family, Charles, to become Prince of Romania under the name Prince Carol.

In 1881 the Principality of Romania was proclaimed a Kingdom. For dynastic reasons, Carol's grandchildren renounced Catholicism and were brought up in the Romanian Orthodox Church.

Main article: Kings of the Romanians

In 1947 the Kingdom of Romania was abolished and replaced with the People's Republic of Romania.

Michael has retained his claim on the defunct Romanian throne. At present, the claim is not recognised by Romania, a republic. At 10 May 2011, Michael severed all of the dynastic and historical ties between the House of Romania and the House of Hohenzollern.[8]

Main article: Line of succession to the former Romanian throne

Coat of arms of the Hohenzollerns, Brandenburg, Prussia, and the German Empire[]