Familypedia
Register
Don't have an account?
Sign In
Advertisement
in: Luxembourgian dynasty, House of Limburg, European royal families,
and 4 more

The House of Luxembourg (Czech: Lucemburkové) was a late medieval European royal family, whose members between 1308 and 1437 ruled as King of the Romans and Holy Roman Emperors as well as Kings of Bohemia (Čeští králové). Their rule over the Holy Roman Empire was twice interrupted by the rival House of Wittelsbach.

The Luxembourg line was initially a cadet branch of the ducal House of Limburg–Arlon, when in 1247 Henry, younger son of Duke Waleran III of Limburg inherited the County of Luxembourg upon the death of his mother Countess Ermesinde, a scion of the House of Namur. Her father, Count Henry IV of Luxembourg, was related on his mother's side to the Ardennes-Verdun dynasty (also called the elder House of Luxembourg), which had ruled the county since the late 10th century.

Count Henry V's grandson Henry VII, Count of Luxembourg upon the death of his father Henry VI at the 1288 Battle of Worringen, was elected Rex Romanorum in 1308. The election was necessary after the Habsburg king Albert I of Germany had been murdered, and Henry, backed by his brother Archbishop-Elector Baldwin of Trier, prevailed against Charles, Count of Valois. Henry arranged the marriage of his son John with the Přemyslid heiress Elisabeth of Bohemia in 1310, through whom the House of Luxembourg acquired the Kingdom of Bohemia, enabling that family to compete more effectively for power with the Habsburg and Wittelsbach dynasties. One year after being crowned Holy Roman Emperor at Rome, Henry VII, still on campaign in Italy, died in 1313.

The prince-electors, perturbed by the rise of the Luxembourgs, disregarded the claims raised by Henry's heir King John, and the rule over the Empire was assumed by the Wittelsbach duke Louis of Bavaria. John instead concentrated on securing his rule in Bohemia and gradually vassalized the Piast dukes of adjacent Silesia from 1327 until 1335. His son Charles IV, in 1346 mounted the Imperial throne. His Golden Bull of 1356 served as a constitution of the Empire for centuries. Charles not only acquired the duchies of Brabant and Limburg in the west, but also the former March of Lusatia and even the Margraviate of Brandenburg in 1373 under the Kingdom of Bohemia.

The family's decline began under Charles' son King Wenceslaus, deposed by the prince-electors in 1400 who chose the Wittelsbach Elector Palatine Rupert. In 1410 rule was assumed by Wenceslaus' brother Sigismund, who once again stabilized the rule of the Luxembourgs and even contributed to end the Western Schism in 1417; however, with his death in 1437, the senior branch of the dynasty became extinct. He was succeeded by his son-in-law, the Habsburg archduke Albert V of Austria. The Habsburgs finally prevailed as Luxembourg heirs, ruling the Empire until their extinction upon the death of Maria Theresa in 1780.

According to the Salic law, the succession could have been disputed, in which case it would have passed collaterally to the cadet branch of Ligny. That branch descended from a younger son of Henry V, and was headed by Louis de Luxembourg, Count of Saint-Pol, before he was executed for treason by Louis XI of France.[3] 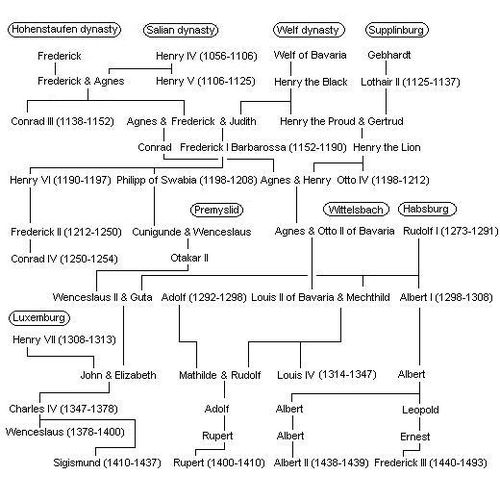 The first instance of the house of Luxembourg seems to be:

Two houses descended from the women of the counts of Luxembourg, the Counts of Loon and the Counts of Grandpré, wear a shield barry. Both families had a place in relation to the succession of the House of Ardennes. Indeed, the Count of Grandpré was the next heir of Conrad II of Luxembourg, the last representative of the Ardennes dynasty, but Emperor Frederick Barbarossa preferred that Luxembourg was held by a lord Germanic rather than French and attributed the county to Henry, son of Conrad's aunt Ermesinde and Count Godfrey I of Namur. The Counts of Loon are also in position to claim the inheritance Luxembourg, albeit weaker position: