The capital Grodno, is the biggest city of the province. It lies on the Neman River. Grodno's existence is attested to from 1127. Two castles dating from the 14th - 18th centuries are located here on the steep right bank of the Nemen. Many consider this city one of the most beautiful in Belarus: one of its masterpieces survived through the centuries, Orthodox St Boris & St Gleb (Kalozhskaya) Church dating back to the 12th century, is the second oldest in Belarus.

In 1413, the province and its Grodno capital were incorporated into the Crown of the Kingdom of Poland. In 1441, Magdeburg Law charter was granted to the capital by Casimir IV Jagiellon Grand Duke of Lithuania and future King of Poland. In 1444, Grodno received its Coat of Arms from Casimir's hands as well as substantial trade privileges.

Strong economical development of the province continued during the reign of Casimir's son - Duke Alexander Jagiellon who founded the first solid bridge over the Neman River as well as Monastery of Order of Saint Augustine and Monastery of Polish Ordo Fratrum Minorum. Later, Bona Sforza Queen of Poland and Grand Duchess of Lithuania, placed in Grodno her royal residence. According to medieval surveys, Grodno had 35 streets and 700 houses in 1558.

The golden age of the province falls on the reign of Stephen Báthory King of Poland, that is between 1576 and 1586. During his reign Grodno became royal headquarters and began to host sessions of Polish–Lithuanian Commonwealth Senate and Parliament. In 1580, on king's order the castle of Grodno was rebuild in Renaissance style of architecture, by Scoto di Parma.

In beginning of the 17th century, Grodno was one of the most developed and important cities in Polish–Lithuanian Commonwealth, traditionally recognized as the third capital of the commonwealth. Deterioration of province status began with Livonian War which put Polish–Lithuanian Commonwealth in long lasting and exhausting military conflict with Tsardom of Russia and Swedish Empire. Between 1765 and 1780, the province regained some of its previous status when Antoni Tyzenhaus the Treasurer of the Grand Duchy of Lithuania and Administrator of Polish Royal Estates, was governing the capital and the province. Around 50 new economical endeavours was undertaken by Tyzenhaus in the region, new manufactures, mills and workshops have been built.

Being a part of the Polish-Lithuanian Commonwealth amounting to the GDL's Trakai Voivodship and due to subsequent Partitions of Poland, whole the Grodno region was finally annexed by Russian Empire by the end of 1795. The city of Grodno then became a seat for Grodno Governorate.

During the World War I the Grodno region was occupied by Germany. German troops entered Grodno city on 3 September 1915, plundering famous Library of Dominicans Order. During German occupation, polish citizens of Grodno region were persecuted and had restricted civil rights. At the end of the war, the Belarusian National Republic declared its independence from the Soviet Russia in March 1918 in Minsk. Grodno was the site of the last stand of the BNR's Council (Rada). Soon, the Council was forced to emigrate as Soviet troops invaded the region and the city in 1919. The same year Polish–Soviet War broke out and lasted till 1921.

Under the terms of Peace Treaty of Riga the region and the city returned to Second Polish Republic which claimed rights to this territory as a successor to Polish–Lithuanian Commonwealth and as victorious side of the Polish–Soviet War. By 1939, the Grodno city had 60,000 inhabitants, with Poles and Jews accounting for 60% and 37% of the population respectively.

On 17 September 1939, the Grodno region was invaded by Soviet Union and incorporated by force to the Soviet Union. During the World War II the region felt under Nazi German occupation. In November 1941, German occupants established Grodno Ghetto for Jewish citizens of Grodno and rest of the region population. In 1942, after a year of severe persecution and planned starvation of ghetto inhabitants, 10,000 Jews of Grodno were deported to the German concentration camp of Auschwitz-Birkenau and murdered there. Next year, in 1943, survivors of remaining 17,000 of ghetto inhabitants were again deported to Auschwitz-Birkenau as well as to Treblinka Extermination Camp and Białystok Ghetto. Although on 13 March 1943, German troops reported the end of extermination and described Grodno city as judenrein, around 50 Jews survived the extermination, hidden also by non-Jewish families.

As a result of Joseph Stalin's policy of expansion to the west, it was decided during Yalta Conference that polish eastern border shall be set along so called "original" Curzon Line. Executing this decision, would keep left-bank part of Grodno town within borders of Poland. It is actually not clear till today, how the original Curzon Line near Grodno has been moved by around 20 km to the west. When so called "mistake" (today regarded rather as deliberate sabotage within British ministry structures) became obvious to negotiators, Stalin refused to correct mistaken line. Despite of multiple and desperate appeals of polish citizens of Grodno, the whole Grodno region was incorporated to the Soviet Belarus.

Since 1991 the Grodno region constitutes one of 6 provinces of independent Belarus.

The Mir Castle Complex, a 16th-century historical landmark as well as part of the Belovezhskaya Pushcha nature reserve, both UNESCO World Heritage sites are located in this region.

Nowadays, Belarusians account for 62.3% of the population. The region is a home to significant minority populations: 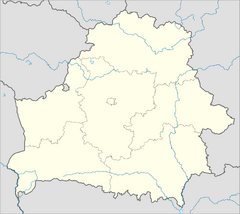