Familypedia
Register
Don't have an account?
Sign In
Advertisement
in: Pages with non-numeric formatnum arguments, Huși, Cities in Romania,
and 2 more

Huși is a city in Vaslui County, Romania, former capital of the former Fălciu County in the historical region of Moldavia, Romanian Orthodox episcopal see, and home of some of the best vineyards of Romania. The city is located on a branch of the Iași-Galați railway, nine miles west of the Prut River and the frontier with the Republic of Moldova. In 2000, the city's population was 33,320, more than double the 1900 population of 15,404.

One theory states that Huși was founded in the 15th century by a colony of Hussites, from whom its name would have been derived; this has been disputed by renowned scholars such as Nicolae Iorga and the bishop Melchisedec, who argued that the name of the city is older, originating with the boyar Hus (whose name is also rendered as Husul or Husea), who owned land in the area.

The first document mentioning the city is a letter of December 17, 1487, sent by the Prince of Moldavia, Stephen III the Great, to the influential Saxon traders of Brașov; the text indicates that the letter had been sent from Huși. Soon after, Huși became one of the favorite places of residence of Stephen III, a fact which led to a noted rise in economical and political status for the following period.

Princes who succeeded Stephen—such as Bogdan III cel Orb, Petru Rareș, Iliaș, Alexandru Lăpușneanu, and Ioan Vodă cel Cumplit—also chose Huși as one of their favorite residences (taking in view both its wines and the strategic location which allowed an efficient overseeing of several anti-Ottoman campaigns).

In 1598, during the reign of Ieremia Movilă, Huși was established as an episcopal see of the Eastern Orthodox Church, although the Huși cathedral had in fact been built by Stephen III (1491) as the church of his palace there. After 1598, the bishops became the owners of the city and its lands, and were thus the main agents behind the city's development.

In 1711, Huși was the place of signing for the Treaty of the Pruth that ended the Russo-Turkish War.

According to the 2002 census, the population of Huși was of 29,510 inhabitants out of which:

The majority of the population is christian-orthodox, but there also is a roman-catholic community for which two parishes exist. 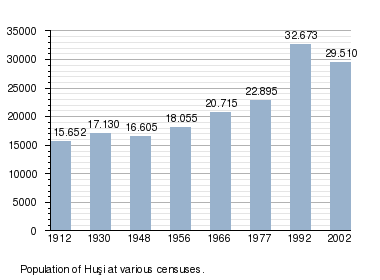