Familypedia
Register
Don't have an account?
Sign In
Advertisement
in: Districts of Germany, Lists of country subdivisions, Germany geography-related lists 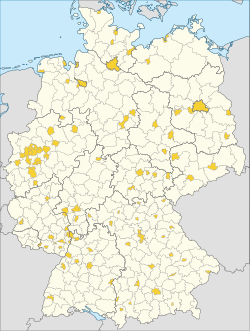 Germany's sixteen states are further subdivided into 402 districts of which 107 are urban districts[1] (Kreisfreie Städte or Stadtkreise) – cities which constitute a district in their own right. They are listed at the List of districts of Germany. A similar concept is the Statutarstadt in Austria. Kreisfreie Städte are comparable to independent cities or unitary authorities in the English-speaking world. The number comprises the city-states of Berlin and Hamburg, also constituent states of Germany, as well as Bremen and Bremerhaven forming the two-cities-state Free Hanseatic City of Bremen.