Familypedia
Register
Don't have an account?
Sign In
Advertisement
in: Allred (surname), Born in 1813, Died in 1859,
and 2 more

The 1830's saw a great Protestant religious revival sweep across the United States that was called the "Second Great Awakening" and was characterized by much emotional preaching, spiritual and social reform movements and a surge in membership growth for a great many Christian denominations.

This period also saw the rise of a new Church of Christ that was organized in early 1830 by its young prophet-leader, Joseph Smith (1805-1844), and after 1838 was formally named The Church of Jesus Christ of Latter-day Saints. This church group was frequently called the "Mormon Church" or "Latter-day Saints" (LDS) for its belief in a new set of holy scriptures called "The Book of Mormon". For better or worse, this new religion generated a lot of attention in this region.

Missionaries of this church taught that it was not a reform movement or protest movement but a "restoration" of the original church with completeness of the full of doctrine of the gospel of Jesus Christ including the ministering of angels, the restored priesthood, lost scripture, revelations, prophecy, living apostles, the gifts of the spirit and much more. This message had profound impact on many who subsequently left all to follow the Prophet and the Church. In many cases their faith was so strong as to push these early converts to endure many difficult hardships and sacrifices and to eventually journey over a thousand miles westward to settle in the Great Salt Lake Valley. (See also New Religion (LDS 1830).)[1][2]

Isaac Allred was baptized into the Church of Jesus Christ of Latter-day Saints on Sept. 10, 1832, by Geo. M. Hinkle.

Zion’s Camp, a group of approximately one hundred and fifty men, gathered at Kirtland, Ohio, in the spring of 1834 and marched to Jackson County, Missouri. By the time they reached Missouri, the camp had increased to approximately two hundred men.[3]

In 1834 he marched to Missouri as a member of Zion's Camp and afterwards located in Nauvoo, Ill. After working on the Nauvoo Temple he received his endowments in the same after its completion.

Until his death, he entertained friends, family and saints with his fiddle music--in Nauvoo, on the plains, in Salt Lake City and in Sanpete County--and his 1724 instrument remains intact and playable.

He worked for the Church, traveled as a preacher of the Gospel and participated in the general exodus of the saints from Nauvoo in February 1846. He spent a short time in the camp on Sugar Creek, Iowa, and later crossed the prairies of Iowa to the Missouri river. In 1851 he captained a company of saints to Utah and settled at Kaysville, Davis county, Utah. He filled a mission to Great Britain in 1851-1855, and through his labor in the States and in England many converts were brought into the Church.

After his return from this mission to Europe in October 1855, he moved to Ogden, where he resided until the the move in 1858 to Sanpete county, where his parents and some siblings resided. There he remained for a year, when he was killed by his cousin and Mormon Battalion veteran Thomas Celton Ivie (1820-1865), who assailed him over a trivial matter and beat him with a burning stick from the camp fire May 11, 1859. He died the next day. The difficulty arose over some sheep which Isaac had in charge and which belonged to Thos. Ivie. His murderer was tried and condemned to death, but he managed to escape and went east. Brigham Young (1801-1877) prophesied that Thos. Ivie would apostatize from the Church and that buzzards would pick his bones. This prediction was literally fulfilled, as the remains of Ivie were subsequently found in a cornfield nearly devoured by buzzards.

The Ivie and Allred Families were close acquaintances and intermarried since the early 1800s in Banks County, Georgia.

After spending quite a few hours research the killing of Isaac Allred by his cousin Thomas Celton Ivie, I have different conclusions than that published by other researchers. Someday I would like to have time to spend in the actual court record to see who said what. Please read the following, and if you have no hard belief in some other direction, please add it to Isaac's Find A Grave entry.

"FIGHT: Thomas Celton Ivie admitted in court to killing Isaac Allred on 11 May 1859, in a fight on Pleasant Creek. He claimed he had not intended this. (The two men were first cousins via Thomas' mother Sally Allred Ivie, and Isaac's father James Allred.)

• Apparently the two men had an argument over some sheep Thomas owned, which Isaac had in his possession, and refused to turn over. The argument took place at Pleasant Creek, Sanpete County, and turned physical. One court testimony report states Isaac Allred struck several blows and was strangling Thomas, who then picked up a 'brand from the fire' [a cedar stick], and struck Isaac over the head with it. Apparently the blow was hard enough to inflict a major concussion, as the reports say Isaac lived another eight hours, but never spoke again.

• If this testimony is true then both men were at fault. There was no murder, only a terrible accident."

Isaac had ten children by his first wife, five by his second wife and two by the third wife. All of these grew up to manhood and womanhood, except one, and all distinguished themselves as faithful Latter-day Saints.

Per the records of the Emphraim, Utah Cemetery Board, Isaac was buried in the Ephraim Pioneer Cemetery in May 1859; however, the original burial spot is unknown, and various stories exist as to the lack of a headstone. On Friday, June 24, 2011, a commemorative headstone was dedicated by Allred descendants. 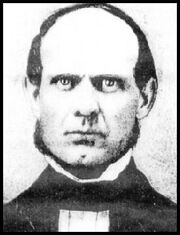