Ivan I Danilovich Kalita of Moscow (Иван I Данилович Калита)

After the death of his elder brother Yuri III, Ivan inherited the Grand Principality of Moscow. Ivan participated in the struggle to get the title of Grand Prince of Vladimir-Suzdal which could be obtained with the approval of a khan of the Golden Horde. The main rivals of the princes of Moscow in this struggle were the princes of Tver - Mikhail Yaroslavich, Dmitri Mikhailovich of Tver, and Aleksandr Mikhailovich, all of them having obtained the title of Grand Prince of Vladimir-Suzdal and being deprived of it. All of them were murdered by the Golden Horde.

In 1328 Ivan Kalita received the approval of khan Muhammad Ozbeg to become the Grand Prince of Vladimir-Suzdal with the right to collect taxes from all Russian lands.

According to the Russian historian Kluchevsky, the rise of Moscow under Ivan I Kalita was determined by three factors. The first one was that the Grand Principality of Moscow was situated in the middle of other Russian principalities; thus, it was protected from any invasions from the East and from the West. Compared to its neighbors, the principalities of Ryazan and Smolensk, Moscow was less often devastated. The relative safety of the Moscow region resulted in the second factor of the rise of Moscow – an influx of working and tax-paying people who were tired of constant raids and who actively relocated to Moscow from other Russian regions. The third factor was a trade route from Novgorod to the Volga River.

Ivan Kalita intentionally pursued the policy of relocation of people to his principality by an invitation of people from other places and by purchase of Russian people captured by Mongols during their raids. He managed to eliminate all the thieves in his lands, thus insuring the safety of traveling merchants. Internal peace and order together with the absence of Mongolian raids to the Moscow principality was mentioned in Russian chronicles as “great peace, silence, and relief of Russian land.”

Ivan made Moscow very wealthy by maintaining his loyalty to the Horde (hence, the nickname Kalita, or moneybag. He used this wealth to give loans to neighbouring Russian principalities. These cities gradually fell deeper and deeper into debt, a condition that would allow Ivan's successors to annex them. The people called Ivan the ‘gatherer of the Russian lands’. He bought lands around Moscow, and very often the poor owners sold their lands willingly. Some of them kept the right to rule in their lands on behalf of Ivan Kalita. In one way or another a number of cities and villages joined the Moscow principality - Uglich in 1323, the Beloozero in 1328-1338, the Halych in 1340. Ivan's greatest success, however, was convincing the Khan in Sarai that his son, Simeon Ivanovich, should succeed him as the Grand Prince of Vladimir; from then on, the important position almost always belonged to the ruling house of Moscow. The Head of the Russian Church - Metropolitan Peter, whose authority was extremely high, moved from Vladimir to Moscow to Prince Ivan Kalita.

Under Ivan Kalita, Moscow was actively growing, and his residence on the Borovitsky hill became the main part of the city. Erection of either wooden or white-stone constructions was started in the Kremlin. A number of churches were built: in 1326-1327 the Dormition Cathedral of Moscow, in 1329 the Church of Ivan the Ladder, in 1330 the Cathedral of the Saviour on the Bor (Forest), and in 1333 the Cathedral of Archangel, where Ivan Kalita and his descendants were buried. Between 1339 and 1340, Ivan Kalita erected a new, bigger oaken fortress on the Borovitsky Hill.

In Ivan’s will "the golden captain" was mentioned for the first time; this cap is identified with the well-known Monomakh’s crown, the main crown's of Russian sovereigns. 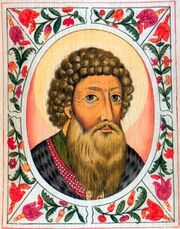