James Adair in the Ninety-Six District

The Ninety-Six District was the westernmost judicial district of South Carolina before it was organized into counties in 1785. Per James Adair (Historian) it was so named because of it's distance in miles to the Cherokee Settlements.[1]

South Carolina 1790 US Federal Census has two entries for Joseph Adair. Both entries show on page 13 of the Laurens County Census. 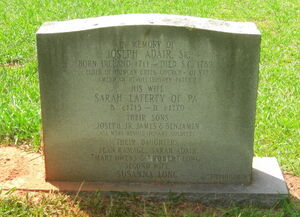 Located in front of Ashpole Presbyterian Church in Rowland, North Carolina is a large memorial stone tribute to James Robert Adair, listing his exploits as pioneer physician, patriot of the revolutionary war and indian historian. No information on who put this stone here or why. FindAGrave attempts to link him to immigrant Thomas Adair, but GENI.com gives many reasons to thoroughly dispute this association. This spot is most likely the final grave of Robert Adair (1709-1783), no relation to our James Adair, but frequently confused with him.

Colonel Williams Memorial Petition (dated 03-Sept-1779) was a special effort during American Revolutionary War by the officers and soldiers of the Little River District Militia Regiment of South Carolina who had served under his command. Because of severe political turmoil in the Little River District, many false rumors were spread about the loyalists about Col Williams, the unit commander. The list of signatories on this petition is an historical list of the prominent Patriot leaders in this district.

Adairsville, Georgia is a city in Bartow County, Georgia, United States. As of the 2010 census, the city had a population of 4,648. Adairsville is approximately halfway between Atlanta and Chattanooga on Interstate 75. Adairsville used to be a small Cherokee village named after Chief Walter (John) S. Adair, grandson of James Adair, historian, who married a Cherokee Indian woman before the removal of the Cherokee in 1838. It was part of the Cherokee territory along with Calhoun and including New Echota.

Adair, Oklahoma is a town established in 1883 in Mayes County, Oklahoma, United States. The population was 790 at the 2010 census, compared to 704 at the 2000 census. It opened a Cherokee school. Adair is named after two Cherokee brothers, William Penn Adair (1830-1880), a politician and jurist (and namesake for Will Rogers), and Dr. Walter Thompson Adair. Site of the daring Dalton Gang great train robbery in 1892 when eight members held up the Missouri-Kansas-Texas train at Adair, Indian Territory (IT).

Adair County, Oklahoma is a county located in the U.S. state of Oklahoma. As of the 2010 census, the population was 22,286. Its county seat is Stilwell. Adair County was named after the Adair family of the Cherokee tribe. One source says that the county was specifically named for Watt Adair, one of the first Cherokees to settle in the area.

(Results may include any of the above.)

Wikipedia may have more than one relevant page and may in future have more information of genealogical interest about
James Adair in the Ninety-Six District; check from time to time and copy as desired.

More detail of some[]

(Details from census and other records can help distinguish.)

Many Adair family burials are found at the following locations: